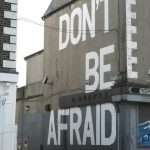 In university days, the college branch of the Liberal Party declared its gender equality at Freshers’ Week with a poster declaring that women made decisions, not tea. Even in the 1970s, it seemed a redundant statement; Margaret Thatcher had become prime minister the previous May, no-one would ever doubt that women had become decision-makers.

Educated in a culture of equality and coming to Ireland in 1983, it seemed odd that there were institutions still locked in mindsets from the 19th Century, not only locked in the past, but proud of maintaining that inequality.

Reading John Boyne’s novel A History of Loneliness, Father Odhran Yates, the narrator of the story, reflects on gender roles in the church. Patriarchy rules in Boyne’s character’s description:

“There were men who volunteered as well, of course, but God forbid that any of them should get stuck with the menial work. No, the men read the lessons on a Sunday morning when there was a decent-sized congregation to testify to their saintliness. Or they became ministers of the Eucharist, standing at the edges of the altar with expressions of piety on their faces as they offered the body of Christ to those members of the flock who had failed to arrive early enough to sit by the centre aisles, where the priest himself gave communion. The men helped to write the parish newsletter, but the women delivered it. The men organized the church social evenings, but the women cleaned up when they were over; the men encouraged the children to take part in family Masses, but the women had to look after them when they did. This was not particular to my mother’s day or my mother’s church; I have known men and women like this all my life and there are some things, rotten and discordant to the core, that will never change”.

“There are some things, rotten and discordant to the core, that will never change.” Do Father Yates’ words represent the reality of what is out there? Many of us could produce anecdotal evidence of a church that was very different in its character, but anecdotal evidence is not sufficient to contradict the institutional inequality. So is there no prospect of the church ever changing, of it ever moving from the 19th to the 21st Century?

Clerical child abuse forms the central theme of Boyne’s bleakly depressing novel that leaves one wishing for the disappearance of the last vestiges of the church. Perhaps a commitment to equality and inclusivity might not only bring the church forward by a century, but give it the prospect of survival in hostile times.