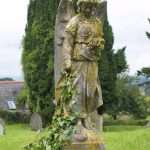 “Get the telephone directory and find out which undertaker is on call for stillborns”. Sister Evangelina’s businesslike manner was the conventional response to the deep grief of stillbirth.

Tonight’s episode of Call the Midwife had more pastoral sensitivity than might have been expected in the early 1960s. The vicar protests at there being a lack of any proper funeral rite for baby April, there being no liturgy, no prayers. In the convent chapel he improvises a service for the grieving parents and members of the nursing and religious community.

Sadly, in most cases, the vicar’s attitude is a retrojection of thinking from our own times; few clergy in his time would have reacted as he did. Even years later, there were still not many who would have demonstrated such a deep pastoral awareness.

It is two decades since I knew Mary. In the 1960s, Mary went into premature labour in her little country cottage, tucked deep within the hills of Co Antrim. Her little baby was stillborn, before the ambulance arrived from the local town. Weak and still haemorrhaging, she was made to walk out to the waiting vehicle. Her husband was left to gather up the only child they would ever have. He and Mary buried their baby among the flowers of their well tended garden; there were no prayers, no ceremony, no clergyman, no offer of pastoral support. Nothing. The pain remained with her and her husband for the rest of their days, how could it not have done? The child for which they had hoped, the child that was so precious, treated as if it had never had existence, as if it was nothing. There were no words that could apologize for the pain caused to the couple, no possibility of an expiation of the hurt. Mary’s husband died before his time, the hurt never healed

Ordained in 1986, when at least a burial ceremony was permitted, I was told I was not to record in the burial register the forenames of babies who had died unbaptised: they were to be noted as simply “Baby” and whatever the surname was.

I had thought such attitudes were confined to a cold, matter of fact Protestantism until listening one evening in 2012, t0 RTE Radio’s broadcast of John McKenna’s 1995 documentary “Children at the Bottom of our Garden” – a profound piece of drama prompted by McKenna’s discovery when his mother was dying that her stillborn children had been buried in the family garden. The scenes described were of unimaginable pain: husbands making burial shrouds from bedsheets, coffins being fashioned from wood from the shed; no dark suit and white collar coming down the road; no lying in a church or chapel; no prayers, no hymns, no mourners; nothing more than the glint of a spade in the early morning. The words recounted young men in suits, returning from dances as the daylight came, being passed by grieving men on bicycles, spades tied to the crossbars like rifles, small packages tied to the back, heading to the yards of ruined churches, or the sites of ancient raths; for, barred from consecrated ground,  where else might they bury their children?

These were not times in distant history, these were our own times.

Call the Midwife was a model of understanding and empathy compared with the reality of the pain caused by the church, pain that was added to an already indescribable grief.