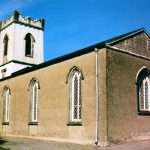 “He was transfigured before them”.  Mark 9:2

Today’s Gospel reading, the story of the transfiguration of Jesus, can be thought about in four words: chosen, changed, challenged, and cherished.

In Saint Mark Chapter 9 Verse 2, we read, “Jesus took with him Peter and James and John, and led them up a high mountain apart, by themselves”. Within the Twelve, Jesus seems to have an inner circle of followers, a chosen group, who are with him at particular moments. It seems always strange to me that Andrew is not part of the group, the man remembered as the first missionary because he tells his brother about Jesus seems to fade into the background, only appearing occasionally, but the other three fishermen called from their nets on the shores of Lake Galilee become Jesus’ closest friends. Being chosen causes pride on the part of James and John who become unpopular with the other disciples because they ask for special places in Heaven, Saint Mark Chapter 10 Verse 41 tells us, “When the ten heard this, they began to be angry with James and John”.

Being chosen did not mean things would be always easy. Going with Jesus high into the mountain would have been physically demanding, it would have been tiring, the disciples probably wondered what it was that was taking them into such a remote place, perhaps they even grumbled to themselves about being called to a life of hardship when they could have had a secure and happy life back on the lake.

Being chosen is a great privilege, but it brings great responsibility. If we have heard God’s voice in our own lives, if we have had a sense of God’s presence with us, we have that sense of being chosen, but there might be moments when we wish someone else had been chosen, when we wish we could just go back and live the life we were leading. The disciples must have had that wish at times, if we read Saint John Chapter 21, we find they have gone back to their boats, back to the place that was familiar, but Jesus has chosen them and great things lie ahead. Jesus has chosen us, has a plan for us.

We read on, in Chapter 9 Verse 2, “And he was transfigured before them”. What does this mean? Verse 3 explains, “and his clothes became dazzling white, such as no one on earth could bleach them”. The mood on that mountainside is changed in an instant from physical tiredness and, maybe, mental weariness to a moment of wonder as Jesus is changed and is joined by two of the great men from Scripture, Verse 4 says, “And there appeared to them Elijah with Moses, who were talking with Jesus”. Suddenly, God changes a moment. Jesus is changed in the eyes of his friends, they see him differently.

Seeing Jesus as God sees him not only means Jesus is changed, it means we are changed. The disciples realize who it really is that walks along with them. Are we changed? When “the Lord be with you” is said in the service, do we have a feeling that the person who was changed on that mountainside, is the person who is with us? Are we changed when we think of God?

It went beyond being changed inwardly, the disciples are challenged outwardly. How will they respond to what they have seen? Peter tries to respond to the challenge.  In Verses 5-6, Saint Mark says, “Then Peter said to Jesus, ‘Rabbi, it is good for us to be here; let us make three dwellings, one for you, one for Moses, and one for Elijah.’ He did not know what to say, for they were terrified”. Peter’s response might have seemed naive, even silly, how were they going to make shelters, what were they going to use, sticks, rocks? Nothing they could have built could have possibly matched the glory of the moment, but Peter did try to respond to the challenge, he did try to respond to the change that had taken place. God wanted something far more profound than the building of shelters, as we read in Verse 7, “Then a cloud overshadowed them, and from the cloud there came a voice, ‘This is my Son, the Beloved; listen to him!'”

Recognizing Jesus for who he is challenges us. If we have sense that the person about whom we read has been changed from a figure in a story to being someone real and present with us, it challenges us about how we are going to respond to Jesus. When that chosen group of disciples saw the change, they could not be the same again, they had to meet the challenge of listening to Jesus. We face a similar challenge: if we recognize Jesus for who he is, do we listen to him?

Verses 8-9 are a postscript to the story, “Suddenly when they looked around, they saw no one with them any more, but only Jesus. As they were coming down the mountain, he ordered them to tell no one about what they had seen, until after the Son of Man had risen from the dead”. They were to tell no-one about what they had seen, but they would have cherished every memory of it, they would have cherished every thought of this extraordinary moment. When things became difficult, when people turned against Jesus, the disciples would have cherished all they had seen and heard on that mountainside; when the challenges became great, cherishing the memory became even more important.

Chosen, changed, challenged and cherishing: if we listen to God’s Son, this is how we respond.