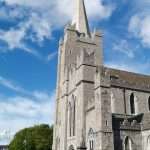 “He was in the wilderness for forty days, tempted by Satan; and he was with the wild beasts; and the angels waited on him”. Mark 1:13

Temptation is not something most of us would readily choose; real temptation demands difficult choices, choices which may affect our lives for years to come. Temptation is not something Jesus chooses to experience, it is forced on him, “the Spirit drove him out into the wilderness”, says Saint Mark, the Greek word used is “ekballei”, Jesus is thrown out, pushed by a force he cannot resist. “He was in the wilderness forty days, tempted by Satan”, Saint Mark describes the experience in very succinct terms. If we are to know more of the choices that Jesus had to make, we have to turn to Saint Matthew or Saint Luke for descriptions of what it was that Jesus was forced out to face.

If we follow the order of the temptations as they appear in Saint Matthew Chapter 4, we see them as being concerned with personal preference, with prestige, and with power. Jesus is challenged make difficult choices.

There is the temptation to turn the stones into bread. Jesus is hungry; he has the power to do as he wishes; it would not be such a big deal; anyway, apart from the Tempter,who would know? The temptation is to put personal preference before principle, to look after himself.

Personal preference is a very 21st Century temptation, to seek what we want as our first priority. What does the cosmetics advertisement say, “Because I’m worth it?” Much of our advertising industry, from selling motor cars to selling toothpaste, rests on us seeing ourselves as being of first priority. Our lives become more and more self-centred, and our everyday technology feeds on the temptation of personal preference. How many channels have we now on our televisions? Broadcasting is tailored to our personal preference. If you are like me, and need to watch a detective programme every evening and a string of rugby matches every weekend, then there is no problem; every preference is possible.

The first temptation is resisted, but Jesus is then forced to face a second. In Saint Matthew’s account, the devil takes Jesus up to a pinnacle of the Temple and says, “If you are the Son of God, throw yourself down”. Prestige is at the heart of the temptation; being able to show who you are; not losing face when taunted by an opponent. It must have been galling for Jesus to have to listen to the sneer in the voice of the tempter.

In our own times, prestige must be maintained, even if it means telling lies. Watch the news when something goes wrong, watch politicians, watch business leaders, watch church leaders – how often does anyone put their hands up and say, “we are sorry, we were wrong, we apologize unreservedly?” Instead we have interviews where we will hear everything except an answer to the question that was asked. A veneer of prestige must be maintained at all counts, even if no-one, not even those speaking, believe what is being said. It is especially sad when the church succumbs to this temptation; when we reach the point where we refuse to admit failure or wrongdoing, then the sneers of the devil have got under our skin.

Jesus responds to the temptation of prestige in blunt terms, “Do not put the Lord your God to the test,” he tells the devil. Jesus is saying he will not engage in these mind games. In the Sermon on the Mount in Saint Matthew Chapter 5, Jesus tells his listeners that when they say “yes,” it should mean “yes,” and, when they say “no”, it should mean “no.” The response to the temptation of prestige should be the truth, for, as Jesus himself says, “anything more than this comes from the evil one.“

The devil takes Jesus up to a mountain top and shows him all the nations of the world and all their splendour, “All these I will give you, if you will fall down and worship me.” What a temptation, to have power in return for compromise. Jesus would not compromise.

It would be tempting today to point out all those other groups in our society,  in our nation, who have compromised, all those groups who in our own time put power before principle, but the church is the greatest culprit. In the Fourth Century, after the conversion of the Emperor Constantine, Christianity became the religion of the powerful and the respectable. In the centuries that followed, Christians forgot the roots of their faith; they forgot the Jesus who was an outcast and a reject, and whose death was a scandal; they forgot the faith that Saint Paul proclaimed that was “a stumbling block to Jews and foolishness to Gentiles”. Christendom became the order of things, church and state seamlessly together. Even when the Reformation took place in much of Europe, a Catholic Christendom was simply replaced by a Protestant Christendom. The church was about power and influence and respectability, it was not about Jesus, it was not about a Galilean carpenter hanging on a Cross.

The church might have been chastened in recent times, but there is not much sign it has changed: it still retains its hierarchies, it still expects a place in the state, it still holds on to what it has. It ill becomes the church to criticize others when it has not put its own house in order.

Jesus responds to the temptation of power, “Worship the Lord your God, and serve only him.” It is an uncomplicated, straightforward answer. If the church had given that answer to all the temptations of power and the compromises it accepted, history may have been very different.

Personal preference, prestige and power: the temptations Jesus faced have not gone away.