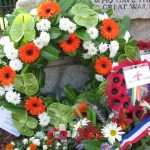 The county council heritage people have invited submissions on how “1916” might be commemorated in the county. “1916” seems to be shorthand for the Easter Rising and the associated events. There is a temptation to feign ignorance and to send to the council a list of those from the county who died fighting in 1916, on the battlefields of France and Belgium and further afield, a list that would be many, many times longer than the casualties of the Rising, but it would be ignored: what would a Brit know, anyway?

Arriving in Ireland in the early 1980s, there were still complaints that the 1966 commemorations, which took place against the background of social revolution and political upheaval around the world, were an opportunity lost to set down foundations for a new Ireland. History was remembered in one way and particular groups were written out of the script of what it meant to be Irish, there were complaints that Protestants and Unionists had no place in the narrative. Of course, it reflected more the politics of 1966 than the realities of 1916, but every commemoration tends to say more about the thinking of the present than the facts of the past.

So the 2016 commemorations will not be about the tens of thousands of Irishmen wearing British uniforms in foreign war zones, 2014 seems to have marked the commemoration of them, it will be about a current political struggle to claim the legacy of Easter Week. The actual reality of the hundreds of Irishmen who died each week through 1916 will be pushed aside in favour of recalling battles that were no more than skirmishes in the European scale of things.

Protestants will not worry too much about what the county council does or doesn’t do, they have long had their own commemorations and now have the courage to wear openly the poppies that were once concealed under their coats. The sad thing about 1916 being recalled as being about Easter Week is that the thousands and thousands of Catholics who died in the Great War will continue to go, for the most part, unremembered.

After next year, when the centenary has passed, there might be a concerted effort to look at the wrong done to the Catholic soldiers and their families who were written out of history. Survivors who returned often found themselves marginalised and found themselves citizens of a state that had little regard for their fallen comrades. Perhaps the county council might look at remembering all the men from the county who died week by week through 1916 in all conflicts, but it is hardly going to do so because that would not serve the purposes of the current politicians.

Anyway, what would a Brit know?