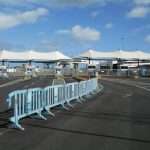 There was a forlorn look about Dun Laoghaire port this morning. The traffic lanes were empty, the ticket kiosks very firmly closed.  It was hard to imagine that these acres of land were once among the best known in Ireland.  The old Carlisle Pier disappeared five or six years ago, its only relic a bare concrete jetty.  Now its successor, built for state of the art sea vessels stands silent.  The terminal building was very firmly locked, though this did not prevent an irate English visitor from trying the doors (that he was English was evident from the loud complaints he muttered). It was announced three weeks ago that the ferry service to Holyhead, which had run for 204 years, would be no more.

If Cobh (Queenstown) was a harbour of a thousand tears, then Dun Laoghaire (Kingstown) must have seen a fair few.  It was the place for the boat to England.  The departure point for those leaving Irish soil to go across the water for a thousand and one different reasons.  Cobh harbour has an historical centre telling the story of migration, perhaps one day Dun Laoghaire harbour will have something similar.  Perhaps the tales collectively would not be so harrowing, but the individual pain was maybe as often as intense.

Ambling through this morning, passing an hour in a leisurely way, conjuring images of those who caught the train to the old Carlisle Pier provided moments of distraction. The imagined figures of the past mingled with personal memories of the place.

Stepping on Irish soil for the first time in August 1981, having travelled through the night, and sleeping in the sunshine on the wall outside the West Pier.  Returning to Dun Laoghaire on a September evening, to catch a night ferry that had ceased to run the previous week, and, being without cash, sleeping on the bench opposite the entrance to the terminal.  Gardai came in the night and shone torches in our faces, just to make the point that sleeping on a bench was something they didn’t like.

In December 1981, crossing in darkness to catch a train northwards for the funeral of a man whom I had not met, but whose daughter I would marry.  A year later, arriving again in the early morning to be met by the principal of the theological college in order to attend a selection conference that would change the course of my life.

If time really happens all at once, and deja vu is simply a recognition that Einstein was right, then a sense of it should be strong in this place.   Turning to walk back up Marine Road, I wondered where I might have been were it not for these acres of land.