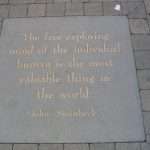 On the night air there seems to come the sound of a human voice, speaking to someone, although there is no reply and it is not clear from where the voice might have come. Perhaps there was no voice at all, for no words were discernible; perhaps it was just a sound that might have resembled a human voice.

Do people who speak of encounters with the divine hear plain speaking voices? Words articulated in tones and a language they can understand? If they do, why don’t other people also hear?

In Sebastian Faulks’ ‘Human Traces’, as his character contemplates carvings of the disciples, he contemplates “hearing voices”:

Suppose that what had disappeared was the capacity to hear voice or voices of the god. Once, all those fishermen would have heard a god; now only Christ could. For early humans separated from their group – the young man, for instance, dispatched to fish upstream — the ability to hear instructions, to produce under the influence of stress or fear the voice of the absent leader or god had once been a necessary tool of survival; but as the capacity to remember and communicate through words had slowly developed, humans had lost the need for heard instruction and comment. The ability to do so had long since ceased to be important and was in fact now like the sightless eyes of bats — a vestigial ability. In this way the Bible all made sense, not as a ragbag of metaphor and myth, but as the literal story of a people crying in the wilderness; for what once had been theirs. ‘I will lift up mine eyes unto the hills, from whence cometh my help. ‘What was that if not the forlorn land agonised call of the solitary human -whose once ever-present, helping voice had left him? He could picture the terrified, lone man, bent over his little bit of agriculture, looking up, craving a voice from the silent hillside.

Thomas felt quite calm as he gazed into the carving. At the beginning of the Bible, everyone – Noah, Abraham, Moses – seemed to hear God’s voice externally; then it was heard only by a minority, who became priests; then the gift became rarer, so the infant Samuel could hear but the old priest Eli could not; and then by the time of the New Testament, Christ alone — and perhaps Paul — could hear voices”.

And now? To hear actual voices, to repeat the actual words, would invite scorn, or medication.