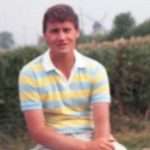 Maybe the unruly hair is the only element of continuity.

Looking back through photograph albums, there are moments when the person seems to be someone entirely different.

Of course, it is the same person; the illusion of it being someone different as illusory as time itself.

One is pulled up sharply by  Albert Einstein who expressed the belief that “the separation between past, present, and future is only an illusion, although a convincing one.”   Einstein believed that the only reason for time was to stop everything happening all at once, like all the bad hair days coming at the same time.

But whatever the master of bad hair may say, there is a sense of some moments from the past belonging to some other time, if not to some other person.

It was he who introduced me to Einstein’s understanding of time; the idea that there is no past and no future, only a present moment.  The sense of déjà vu sometimes experienced in childhood years was no more than the child glimpsing something it simultaneously glimpsed as an adult.  The child had not seen the thing before, he had seen it afterwards; afterwards in the conventional scheme of things, that is.

If physics means all memories happen in a single moment and that we are trapped in this external reality of spacetime where everything is already mapped; then the discontinuity must come from elsewhere.  If externally, we remain the same people because the instantaneous occurrence of time prevents us changing, then that sense that the person in the picture is someone else is internal, but must happen in the same instant as the rest of time.

It means being at once all the different people we remember being as well, as some we do not.  Would this not be a psychologist’s nightmare, multiple personalities?  Presumably only if we glimpse the past and future selves, or what we imagine to be the past and future selves.  If we cling to the illusion of there being a present and to the belief that the personality we now have is part of an ongoing process, then we will not have problems?

But if Einstein was right, and the separation between the selves is really only an illusion, what is there stopping one making adjustments to the personalities one is unhappy with?  What is stopping one stepping back and saying the right thing at the right time, instead of being crass and clumsy and plain stupid and getting the whole thing wrong?

Of course, if one did that, one would not be where one is now and would not be thinking about going back to fix things.  The fact we are where we are suggests that past, illusion or not, is something unchangeable, which is a disappointment in a way.  When wavy hair is all that seems to have remained from the painful times, the option to go back and make adjustments would be very attractive.