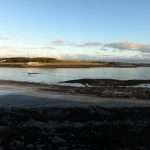 BBC Northern Ireland’s weather map each evening show the name of lesser know spots around the province; tonight’s map included Kilclief. In the local pronunciation, the “c” is silent, the name becomes Kil-lief. Perhaps such usage stems from an earlier Irish form of the word, just as local women were referred to by their maiden names in accordance with old Irish etiquette.

Kilclief is a beautiful spot on the Lecale peninsula. It was a place where one felt one would have stopped if it had been an area where one was taking a holiday, as it was, it was only a few miles from home, so Kilclief was passed by, as we so often pass the treasures on our doorstep.

The Lecale was a special place, but I would say that. It was where I served my first incumbency, in the tiny parishes of Bright, Ballee and Killough; it was where our children spent their early years. In the midst of the Troubles, the Lecale was a place of tranquility. There were afternoons when parish visits were chosen simply for the opportunity to take a circuitous route that would pass along the shoreline.

Lecale was a place where there was a constant awareness of the sea. Winds blowing off Dundrum Bay so that trees grew sideways at Tyrella. The little harbour at Killough from which men in open boats would sail to check their lobster pots. The trawlers with crews of three putting out from Ardglass on all but the worst of days. The ferry at Strangford labouring to cross to Portaferry when the tide was running strongly from the lough.

The sea was there, but most people lived with their backs to it. A living from the sea was possible for only a few. There were farms supporting a fraction of the number they might have done in the past. Earning a living for most meant a journey to Downpatrick, or Belfast. Lecale became a place to which to return at the end of the day, or at the weekend.

Perhaps it was the lack of work that left the place open to changes, to new and different arrivals. It was said that refugees from the Belfast blitz in 1941 were among the first outsiders to arrive to make new lives in Killough. There were stories that houses might have been bought for as little as £5 each. Of course, no-one could actually say which house had been bought for a fiver. The passing years brought waves of interesting people.

Lecale is now somewhere rarely reached. Its little villages are unfamiliar places; its changing coastline a stranger. It would be nice to see Kilclief again.