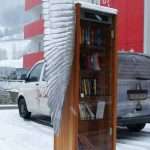 Perhaps something fine is what one might have expected outside a very fine hotel; all the same, the bookcase beside the street that passes the Hotel Tirol in Bad Hofgastein is very fine. Polished wood, a glass door with the words, “Trust, Take, Give” engraved and wings of sculpted chrome feathers on either side. It seemed a piece of art in its own right, the wings recalling the eagle lecterns in Anglican churches that bore the written word to those who listened, but it was a clearly a functioning library. Inside was an assortment of contemporary books, no must old volumes; it seemed that people really were trusted to take and give (though why the words were in English was baffling).

Only when reading the BBC website today did it become clear that the winged library at the Hotel Tirol had an international context. Under the headline, “The world’s oddest libraries?” the BBC report on a book that explores libraries such as that in Bad Hofgastein.

It’s not over for the printed word: a new book exploring the 21st-Century revolution in libraries finds surprising ways in which books are being shared. In Improbable Libraries, journalist Alex Johnson pulls together projects offering reading material for free in phone booths, sheds and airports. In his introduction, Johnson writes: “The very concept of a library is evolving: many of these libraries operate on principles that differ fundamentally from the workings of most traditional public and university libraries. Some, for example, have no membership or identification requirements, and some do not even ask that the books be returned.”

In a world of visual images, of emoticons, and of conversations rendered in textspeak, there is reassurance in the thought that the printed word might enjoy a revival. There is something about books that speaks of freedom, independence, autonomy. Of course, our opportunities to communicate have expanded infinitely; connections, friendships, that were unimaginable in the past are now the everyday reality of social media. The humble mobile phone, with its camera and capacity to transmit across the world, has created a world where the suppression of the truth is almost impossible. But technology depends on an infrastructure that can be controlled; websites and social media can be brought down, even mobile telephones can be blocked, books are different.

Books are tactile, free standing; in the transient electronic world, books have a longevity that approaches immortality. Improbable libraries that put books into the hands of people who might never step inside a library building building have a potential to create a different reality.