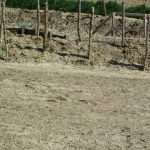 Standing in a war graves cemetery in Northern France on Thursday, 23rd April, we paid our respects to a man who had left his family’s farm in the Irish midlands to volunteer for service in the British army and who had served with both Irish and English regiments before being killed in action a month before the 1918 armistice. It was thought unlikely that any member of the soldier’s family would ever have had the opportunity to visit the grave, so it was felt important that we do more than pass it by. We stood solemnly as Binyon’s “Ode to the Fallen” was recited and, after a silence, the words used in the Kohima Epitaph were spoken.

As we were about to disperse, an unexpected thing happened. A man who had grown up on a neighbouring farm, and who had known the fallen soldier’s brother, stepped forward and knelt before the headstone. He took from his pocket a tiny phial of soil he had brought from the soldier’s family farm and poured it onto the grave, then refilled the phial from the soil that surrounded the headstone to take back to the farm in Ireland. It was probably irregular, if not actually illegal, for such a thing to have happened, yet it was a gesture so profound that it would have taken a hard-hearted person to have raised questions.

None of us present could have articulated the significance of what had taken place, but we knew it was about a sense of something sacred; that the land of the farm from which the soldier had come had become seen as sacralized by generations of sweated labour, and that the soil in which he had been buried had, for his neighbour, become sacred through the presence of the man’s body.

Lest there be a temptation to regard such thought and behaviour as something peculiar to Irish people, to think it a moderate reflection of the thinking of John B. Keane’s character “The Bull” McCabe in Keane’s play “The Field,” it is worth examining Brooke’s poem “The Soldier”.

Thursday, 23rd April, the day on which we visited that cemetery, was the centenary of the death of Lieutenant Rupert Brooke, who died on a French hospital ship from sepsis that developed after a mosquito bite. Brooke was buried the same day at 11 pm, on the island of Skyros, his companions were bound for Gallipoli. Reading Brooke’s poem on that Thursday evening, a hundred years after his burial, there was a sense that he would have understood well a man bringing soil from Ireland to exchange it for soil from France. In his lines he expresses a belief that the soil in which he will be buried will be transformed by his presence, a presence that itself been shaped by the English soil from which he had come. The lines are familiar:

If I should die, think only this of me;
that there’s some corner of a foreign field
that is for ever England. There shall be
in that rich earth a richer dust concealed;
a dust whom England bore, shaped, made aware,
gave, once, her flowers to love, her ways to roam,
a body of England’s breathing English air,
washed by the rivers, blest by suns of home.

“In that rich earth, a richer dust concealed”, Brooke sees the presence of mortal remains as somehow transforming the place. If a soldier’s burial has a transformative power, have other burials a similar capacity to alter the nature of the place in which they have taken place? Does transformation demand blood sacrifice, or is human presence itself enough to effect change?

Ministering in rural Ireland, where church closures in the past have brought visceral reactions, including violent threats, to church leaders, there is a need to understand the deep feelings that are unexpressed. Official church teaching and popular sentiment diverge sharply when it comes to buildings and burial places. While the church might adhere to the words of Jesus in Saint John Chapter 4, that worship is not about any place, but something that is done in spirit and in truth; popular feeling is much more likely to reflect verses from the book Exodus, and other Hebrew Scriptures, that speak of places as  holy ground.

Perhaps the church is guilty of double standards. How many church leaders would deny that the cemeteries in France and Flanders are sacred? Yet if cemeteries among “foreign” fields are sacred places, then why not those at home? Does the violent death of young men grant a sacredness to a site that is not made possible through the burial of generations of good and faithful people? When contemplating church closures, is there a conscious acknowledgement that the withdrawal from a building may be perceived as a desacralisation as likely to cause offence, at a local level, as the abandonment of a war graves cemetery?