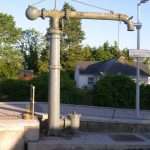 His young bride died on Monday, suddenly and unexpectedly, in a Dublin hospital, at the age of 92. It was February that I last saw her, content in residential care with a pile of novels and her copy of the Irish Times; each Monday evening an old friend still called and they played Scrabble and shared a bottle of wine. The hour spent with her had been filled with laughter as we recalled stories he had told. His fund of stories had been boundless and only when he died in 2004 had the thought arisen that a volume of oral history may have been lost with him.

He had been born in 1910 and grew up on Valentia Island off the coast of Co Kerry, where his father had been involved in the management of the Transatlantic cable station.  His memories of those times were of the Great War and the Troubles and the early years of the Free State.

He would recall a childhood memory of the station being attacked by rebels who thought to disable the place. “There were these glass domes filled with acid in the power room and they came in and smashed them.  They hadn’t realised it was acid and it splashed over them. The next thing we saw was them running down the beach into the water to try to stop the burning.  Do you know how long the station was out of action for? Forty minutes.  They stopped it for just forty minutes.  What was the point?”

He had shaken his head in disbelief at the story – even after eighty-odd years there were episodes he could still not fathom.

His stories of the cable stretched near and far.

“I was in the post office the day the day the telephone came to Cahirciveen.  The engineer was fixing it up and a woman from the country came in.  She looked at it very suspiciously and the engineer asked her if she would like to try it.  He hands her the earpiece and this voice in Killarney says, ‘Hello’, and in this broad country accent she says into the phone, ‘How do you know me?'”

“There were two brothers who worked for the cable company.  One was on Valentia and the other was in Newfoundland; at night when things were quiet, they would communicate with each other”.

Did the brothers really sit and tap Morse signals to each other in the dead of night, or did they just say that they did so?  The picture of two Irishmen communicating across the Atlantic in times when it took days or weeks to travel anywhere had seemed wonderfully reassuring: the world seemed almost domesticized. The advent of the telephone was to eventually make the cable redundant, but it took a while. “Do you know how much a telephone call across the Atlantic cost when they began? Fifteen pounds!” Fifteen pounds was a colossal amount of money; ten weeks pay for a labouring man; thirty weeks of the old age pension; it was beyond the imagination of most people that someone should phone America.

Calling with her brother today to offer belated condolences, he recalled with a smile the day his sister had married her Kerryman. “The reception was at our house and then they were going to Valentia. Trains were irregular, so it was arranged that the stationmaster at Mountrath would phone us to say the train had left for Ballybrophy. We all got on bicycles to go to the station to see them off. Anyway, by the time they reached Cahirciveen by train and had gone down to the jetty, everyone was in bed. He knew where a local fisherman kept a boat, so they took the boat and rowed across to the island. It was two o’clock in the morning before they got to the guesthouse. They had to throw stones at the upstairs window to waken the landlady.”

There was an opportunity to add a detail. “And the honeymoon lasted five weeks because there was an outbreak of German measles on the island and they were quarantined.”

“It did, indeed”, the brother laughed.

Her funeral was yesterday, with her departure there is a sense of somehow losing a piece of history.