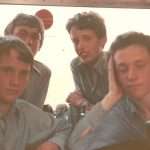 It is forty years since our school visit to London in the summer term of 1975. For a fourteen year old schoolboy with more self confidence than he possesses four decades later, it brought a direct encounter with members of Her Majesty’s government. Having visited the House of Commons, where our host had been the genial Ray Mawby, then Tory MP for Totnes, we arrived in Downing Street as a meeting was ending at Number Ten. The opportunity for autograph hunting was too good to miss.

Taking a postcard of the House of Commons from a bag of souvenirs and borrowing a biro from our teacher, the first target was Roy Jenkins, the Home Secretary, who was hurriedly crossing the street. “Mr Jenkins, can I have your autograph?”

“Oh, all right, but quickly before a crowd gathers.”

“Who was that man?” asked an onlooker as I turned to join our school group.

Roy Jenkins was followed by the Education Secretary, Fred Mulley, who added his name to my postcard. Then there appeared an even better target. From the Saint James’s Park end of Downing street came James Callaghan, the Foreign Secretary who would become Prime Minister a year later, walking along with a foreign visitor. “Mr Callaghan, can I have your autograph?”

“You would do much better to ask this man. He is the deputy prime minister of Egypt,” smiled Callaghan.

Not wishing to be discourteous, I handed the visitor my postcard and pen. We walked down the street together, Callaghan asking about our school and our visit to London, as if he were a kindly grandfather out for a walk with a favoured grandson.

“We’d better go in here”, he said, “the Prime Minister is waiting for us”.

1975 was at the height of IRA terrorism, yet teenage boys were allowed to wander unchallenged around Downing Street, causing no panicked responses; government ministers were people content to move around without a phalanx of security men, there were no guns in sight. Even four years later, visiting London in the spring of 1979 as an eighteen year old, standing on the pavement opposite the door of Number 10 and shouting, “Power to the people,” as David Owen stepped from a limousine brought no more than a contemptuous glance from a policeman.

Forty years ago, the past is another country, I did things differently there.