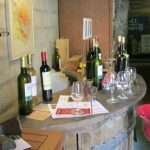 The May bank holiday, but the sky is grey and there are bursts of heavy rain. It seemed a day for doing nothing and nothing was done. A bottle of white wine with our evening meal seemed appropriate; one of those brought home from France last year was opened. It did not taste as it had tasted in France, it never does.

In the summer of 1987, we were on a campsite on France’s Loire Valley; Mesland comes to mind, but maybe it was somewhere else, no matter.  Meeting people from Co Down, we agreed to meet for drinks that evening.  At 9 o’clock, we gathered at their caravan and sat and talked for four hours, drinking glasses full of Pineau des Charentes, a fortified wine drunk normally as an aperitif.  Amid the story telling and the laughter and the warmth of a French summer’s night, the Pineau seemed a perfect accompaniment.  Buying a bottle at the local Intermarché seemed to offer the prospect of brightening up some evening in a Northern Ireland that was still in the midst of the Troubles with the taste of a French summer’s evening.  It was December that year before the bottle was opened, a bleak month in bleak times, a friend called and we sat with a glass of the aperitif, “This is great stuff”, I said, “we bought it in the Loire last summer”.  Of course, it wasn’t great, it didn’t taste at all like it had in the summer.  In a different context, even tastes change.

Context seems everything, behaviour, words, thoughts even, seem dependent upon the particular context in which they are expressed.  Attending regular rugby matches where crowds of up to 50,000 are common, there is an awareness that the context changes the situation; that fifteen players against fifteen players becomes a great drama played out on a field that is something far greater than a hundred metres of grass.  The gathering of tens of thousands of people creates a dynamic that is simply not present when standing in a bar or sitting in the front room at home.

Attending church services in Africa, there is  a sense of the context giving a depth and a strength to the music that is not replicable in Ireland.  The music might be repeated here, but it has not the edge, the urgency of the songs of those who live in the poorest places in the world.  Standing in a two-roomed house in a poor district on the edge of a Rwandan town, the singing of the forty or so people crammed into a room has a mood that cannot be captured in European comfort and security.

Context is everything,  taken out of context, things are different. Come September and our trip to France, the wine will have recovered its taste.