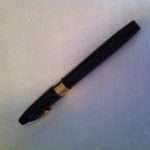 Ireland’s first university was founded in 1311 at Saint Patrick’s Cathedral in Dublin, it never flourished but its historical existence prompts reflection on how things were done in medieval times. Sitting at a meeting of the chapter of the cathedral seven centuries later, the speaker asks for a few moments to set up a laptop in order to give a Powerpoint presentation. What did we do in the past? What happened in medieval times? Particularly in universities, what happened in medieval times? In times when writing materials were expensive, (and students were presumably as penurious as they have been throughout history), people came to listen to lectures and to remember. Lecturer and student alike might be able to recall lenghty passages from the writings of the philosophers, or from Scripture. What happened to that medieval capacity for remembering? Has our ability to remember been now so reduced that we must look at a screen onto which are projected words and images from a computer?

Even in classical times, in the days of Plato, there were concerns that the human faculty for remembering was in decline. Socrates tells a story of a conversation between Thamus and Theuth in ancient Egypt. Theuth has come to Thamus with inventions that include the invention of writing and Thamus is concerned that writing will damage the memories of those who use it.

“For this invention will produce forgetfulness in the minds of those who learn to use it, because they will not practice their memory. Their trust in writing, produced by external characters which are no part of themselves, will discourage the use of their own memory within them. You have invented an elixir not of memory, but of reminding; and you offer your pupils the appearance of wisdom, not true wisdom, for they will read many things without instruction and will therefore seem to know many things, when they are for the most part ignorant and hard to get along with, since they are not wise, but only appear wise.”

It is extraordinary that two and a half thousand years ago Socrates regarded the most obvious of our aides memoire, one that we have for centuries assumed to be a matter of common sense, as something that would damage the human capacity for wisdom. If writing did not turn out to be as damaging to human civilisation as once envisaged, perhaps the age of electronic projection will pass without causing lasting damage.

Albert Einstein is said to have once advised a friend that he never memorized anything he could look up. Einstein saw the mind as something to be used for thinking rather than storing facts. Perhaps he and Socrates were not so far apart, though, both sought wisdom rather than mere knowledge. Having listened and watched the Powerpoint presentation, I concluded I had not a great capacity for either.