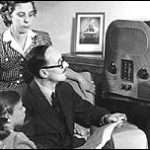 Saturday morning radio listening on Dublin radio stations is not captivating; prattle, or pop and prattle, fill most of the FM waveband. Some stations seem to regard Saturday morning as an opportunity to fill airtime with material from the previous week, some of which is hardly worthy of broadcast a first time and it is baffling as to why anyone would wish to air it again. Two laps of the FM frequencies and there was nothing to do other than to retreat to the familiar sounds of Lyric FM. Sometimes the Lyric presenters assume that listeners have a modicum of musical knowledge, others realize that a Saturday is the sort of time when musical illiterates like myself might be listening and adjust their words accordingly; this morning was obviously a time for ignoramuses like me.

The Adagio from Spartacus and Phrygia by Aram Khachaturian was played. “That’s the theme music from The Onedin Line”, I thought. The Onedin Line was a BBC television drama series from the 1970s. It was always a piece of music associated with feeling gloomy because the series was broadcast on a Sunday evening and the theme tune was an aural reminder that the weeken was drawing to a close.

Growing up in England means having a different set of memories from contemporaries who grew up in Ireland, particularly when it comes to popular culture, and I thought that there were probably not many listening who would have remembered Khachaturian’s work as a TV theme tune. It was with surprise, then, that I heard the presenter say at the end of the piece, “Some people will remember that as the theme music for The Onedin Line”. Maybe our worlds were not so disconnected after all.

Not only was the programme given a mention, the presenter then went on to explain how it had got its title. In a 1973 interview, Cyril Abraham, the producer, said, “One day I stumbled across the word Ondine, a mythological sea creature. By transposing the “e”, I had James Onedin, a sea devil.” Perhaps the presenter had Google “the Onedin Line” as I did this evening (you didn’t think I remembered the piece was the Adagio from Spartacus and Phrygia, did you?), and perhaps the presenter found the same Wikipedia piece I found, but the point was that work had been done in preparing the programme, it was not just the sort of stream of consciousness that passes as presentation on most stations; there had been additional input, some added value. It was a presentation style that marked Lyric out as different from the others on the waveband

Why do people listen to rubbish? Conversations overheard on a bus are usually more interesting than the stuff between the music on many broadcasts. Is the prattle on the pop stations really a reflection of our culture? If it is, there will be nothing like The Onedin Line for people to remember in the future, and no adagios to be recalled as theme tunes.