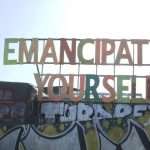 He sat alone in the airport departure lounge, his gaze constantly shifting between checking his phone and surveying those sitting around him. Probably in his late thirties, he had a shaved head and a pointed beard and wore a green tee shirt and baggy shorts. Pausing in his looks around, he lifted his phone and took a picture of himself. It must not have been satisfactory, for he repeated the process, then tapped the screen, presumably sending the image to some recipient he judged would be happy to receive it.

Hardly twenty minutes later, a queue of people stood on the tarmac waiting to board the 75 minute flight to Dublin. As the line paused, the man took out his phone and took another picture of himself, then another and another. He scrolled through the three images, picked one and sent it. Perhaps the person who had received the photo from inside the departure lounge would be pleased to now receive a picture taken outside the departure lounge, perhaps the different light would bring out different qualities in the subject.

The plane took off. The cabin lights were still dim, the seatbelt lights were still illuminated, and the aircraft still climbing, when the man stood up. A member of the cabin staff rushed down the aisle to find out the problem, he wanted to change seats. He was asked to resume his seat. The young couple sat beside him looked bemused.

He sat still for a while, long enough for the trolley to be in the aisle, when he got up and pushed his way past the staff. He walked down the plane and found an empty seat, pushing his way by the cabin crew, he returned to his original seat to collect his laptop, saying he would need to come back later as his bag was in the overhead locker above where he had been sitting.

The man seemed to epitomise the narcissism that seems to have seized contemporary Western societies, a complete obsession with self and a casual disregard for others. The man was not young, nor with his squat, overweight figure was he someone from whom many people would have wished to receive a so-called “selfie”, yet he seemed to regard every circumstance as an opportunity to further photograph himself. Whatever the safety rules of the airline, the man believed his wish for a different seat took priority, even though there was no obvious reason for him wanting to change. However much inconvenience he might cause, he had a right to have what he wanted.

Descending to the point where individual responsibility is a distant second to individual rights, and where self takes priority over everything else, a society becomes unsustainable and must change to survive. In a decade or so, when our society has moved on from the infantile self-obsession that is expressed in the selfie, there will be a whole generation of unhappy people.