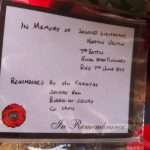 Agatha Christie’s Miss Marple mystery “The Pale Horse” was shown on ITV 3. The tale opens with Jane Marple receiving a letter postmarked London W2, from Father Gorman, a parish priest in Paddington. When asked about her friendship with Father Gorman, Miss Marple remembers times when she had been an army nurse during the Great War and Father Gorman had been chaplain with the South Irish Horse. It was an unexpected reference. The South Irish Horse was a real army regiment. One of their members had been Second Lieutenant Martin Jestin of the Royal Irish Fusiliers who had died at the Battle of Messines on 7th June 1917. Martin Jestin had enlisted in the South Irish Horse in 1914 and had risen through the ranks, being commissioned as an officer in the Royal Irish Fusiliers in February 1917.

Agatha Christie seems to have been meticulous in her research, particular in her eye for detail. Her use of the name of a real regiment would have found resonance with thousands of her readers; that she did not feel a need to use a fictional name is perhaps an indication of people’s preparedness to recall the reality of the history through which they had lived. Miss Marple’s memories of Father Gorman seem to prompt a deep introspection, perhaps the young priest had been the great love in her life. How many of Christie’s readers would have shared that sense of pain, that grief at the loss of the one person they loved?

Vera Brittain’s Testament of Youth, in which the Great War claims those dearest to her, describes a world peopled by countless Jane Marples, yet it is not the stuff of dusty history books. The romances of the years leading to 1914, the brief loves of the war era, left hundreds of thousands of young women who would never marry. The men who died, the men whose lives were irretrievably changed by physical and sociological wounds, became a lost generation. Twenty years later it would all begin again, and another generation of Jane Marples would be left to ponder what might have been.

The Europe of 2015 is a Europe still recovering from the Great Wars of the Twentieth Century, the shadows of those times still shape our politics. Martin Jestin’s death is as relevant in 2015 as it was in 2017.