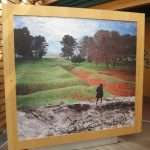 The final hour of our annual remembrance of the Battle of the Somme took us to the Newfoundland Memorial Park on Thursday afternoon. A young member of the park staff greeted us as we entered the place where thousands had died in July 1916; polite, reserved, understated, he was as you might have expected.

“Canadians are so lovely”, commented my companion. On the evidence of those at the Memorial Park, it would have been hard to disagree; everywhere was perfect, everyone was courteous.

The park commemorates the fallen of Newfoundland because the province had not been part of Canada, but had remained a British colony until 1949. Inside the visors’ centre are diplayed the names of the eight hundred communities from which the soldiers had come, the list makes a forcible impression.   It was hard to imagine the young men from the tiny communities represented by the list setting off across the Atlantic to meet the reality of Europe at war; sailing in the fear they would may never return, sailing, having heard the stories of the horrors that awaited them.  The losses they were to suffer on 1st July 1916 were devastating – of the 780 men who went into action, only 110 survived unscathed, of whom just 68 were available for roll call the following morning. There were remote communities that never recovered from the losses suffered in the Great War.

What went through the minds of the young men of Newfoundland as they left their towns and villages, their farms and fishing boats, to enlist to fight on the Western Front? And what of their families? What did those who had left the old world to make new lives in a new world make of their sons and grandsons, their husbands and brothers, being pulled back to Europe to face the mud and the slaughter in France and Belgium? It demanded an extraordinary affection for the “old country”, an extraordinary belief in the justness of the cause, to leave the land the knew to go to one where they would die.

The Newfoundland Memorial Park speaks eloquently of the pain of warm and self-sacrificing people; a lovely people.