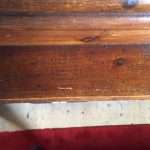 Perhaps E. Despard and his companions were subjected to lengthy sermons, perhaps they could imagine many more exciting things than sitting in a lonely Church of Ireland church on a Sunday morning. A solitary building, standing at a crossroads, four miles from the nearest town, and it only a small place, attendance there did not offer much by way of diversion to the boys taken there by their families. The shelf on which people rested their copies of the black Book of Common Prayer became an outlet for the boys.

Some of the names remain in the community, some have long since disappeared. The years of the Edwardian era recorded against the boys’ names are from a world very different from that which would exist twenty years later.

E. Despard seems to have been bolder than his companions in recording his presence in the church. His name is scratched into the surface of the wood with a black pen, but also set forth in a series of dots. Were it a school desk, one would assume that the name had been written with compass points (the compasses from geometry sets were far more often used for such activities than for drawing arcs for mathematical exercises), as it is, it remains a mystery how young Despard manged to twice record his name, without a heavy parental hand coming down across his ear. Perhaps his father was as bored as he was by the rector’s Sunday homilies, perhaps the boys were left in peace as long as they sat quietly. It seems odd that such obvious defacement of the pews seems to have passed unnoticed, wasn’t the Edwardian era meant to be a golden age? Weren’t former times supposed to be days when transgressions were virtually unknown in rural Ireland?

When young E. Despard wrote his name on the pew, a decade before the old world ended, could he ever have imagined what might lie ahead? Could anyone who sat in the church Sunday by Sunday have imagined the horrors of the times to come? When the old clergyman finished his exposition of Scripture and the last hymn was sung and the congregation dispersed for another week, would he ever have thought that his name would be remembered a century later?

Within feet of young E. Despard’s  inscriptions in wood, his name was recorded by someone else. Perhaps in Flanders fields, he thought about those mornings in Roskelton church.