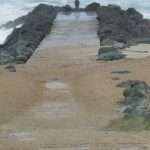 According to Le Monde, today was only going to be a red Saturday, as was last Saturday. There was a black Saturday two weeks ago and there will be another next week. The colours refer to the intensity of the traffic flow on the days marking the beginning and the end of holidays, the “bouchons”, those places where the thousands of vehicles travelling on the French autoroutes come to a complete stop, are all too frequent.

Growing up with the myth that the English worked harder than anyone else in Europe and that the whole of France took the whole month of August for annual holidays, being in France for much of the month of August 1989 came as a surprise. Previous holidays had been mid-July to mid-August, but working commitments pushed back the departure date that year. Spending the first week of August on a campsite on the Mediterranean coast near Béziers, we had crossed to the Atlantic coast to stay in a village twenty miles north of Biarritz. The second week of August had seemed as busy as the first, and the crowds had been huge on the holiday for the Feast of the Assumption on 15th August. A day or two later, as the sunset approached, we had walked down to the beach for an expensive French ice cream, (a treat in times when money was not so plentiful), and had found that the kiosk was closed. Looking around, the car park seemed to have many Dutch and German cars, we realized that large numbers of the French holiday makers had gone, the holidays were over.

It seemed sad for French people to be driving home in mid-August. In a country where summer would have at least another six weeks to run, it seemed almost as though they were leaving the party early. Every holiday has to end, every employer needs staff to return, but on both coasts it had been evident how much the vacances meant to French campers. The Mediterranean campsite on which we stayed had been beside one that seemed to be owned by a French trade union, there had seemed a camaraderie, a community, a bond between those who were there.  Perhaps on their return to the shop floor, they exchanged memories of their days in the August sunshine, perhaps in their northern French home towns their laughter and companionship endured throughout the year.

Holidaying even later in recent years, landing on French soil after the schools have returned, we no longer see red or black Saturdays and seaside towns are moving towards hibernation. Of course it is easier to avoid the bouchons, it is easier to park where we wish, it is pleasant having a beach almost to ourselves, but something is lost: the buzz created by those who go home on 15th August is simply not there.