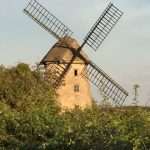 Certainly, growing up in the middle of Somerset, we had no doubt that our community had a unique role in the world. Our exceptionalism began on our road, the windmill at the top of Stembridge Hill was the only thatched windmill in the country, which was not, perhaps, the most exciting of unique claims, but was a reminder that we lived in no ordinary place.

High Ham might have been only three hundred feet above sea level, but once the surrounding lowlands had been under water and the hills in the Somerset landscape had been islands. The sea had meant foreign visitors might reach places that would later become anonymous and landlocked. The traders were said to include Joseph from Arimathea, who must have sailed from the Mediterranean and around the coasts of Spain, France and Cornwall, in order to reach the Bristol Channel and find his way to the Somerset wetlands. In primary school days, the tales were not merely of Joseph arriving here, but of a young companion travelling with him, Jesus of Nazareth. William Blake would have found no shortage of material for his poem Jerusalem if he had lived in our village.

To the north-east of our village, across a stretch of lowland, lay Glastonbury. “Exceptionalism” would be a far too unexceptional word to capture the uniqueness of the place. There were the stories of Joseph, of his bringing the cup from the Last Supper and cruets in which were drops of the blood and sweat of Jesus from the time of the crucifixion. There was the Glastonbury thorn which was said to have grown from the staff of Joseph, itself grown from the crown of thorns.

Then there was Arthur, and, to a primary school boy, Arthur was far more exciting than any of the religious stuff which might have excited some people. Glastonbury was said to be Avalon, the place of Excalibur, the great sword of Arthur. When the autumn mists lay across the moorlands, it was not hard to imagine Arthur and his men riding out to battle. Tradition said that Arthur and his knights lay in Cadbury Hill, not dead, but sleeping, awaiting the moment when they would ride forth again.

Standing on Glastonbury Tor in warm August sunshine, a few neo-pagans, clad as if it was still 1970, stood looking across the landscape.  One pondered a structure on the horizon, asking his companion what it might be. The temptation to explain that it was nothing more exciting than Hinkley Point nuclear power station was resisted. Of course, it is an exceptional place for them, but what is there to compare with Arthur of the Britons, Joseph of Arimathea, Jesus of Nazareth, and the only thatched windmill in England?

If you want true exceptionalism, you need to come to the middle of Somerset.