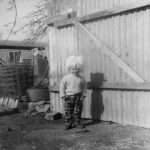 A friend from the ’80s was a good amateur photographer (good to the point where he had exhibitions); he took photographs of unlikely things, interesting things. Driving along the Bangor to Belfast dual carriageway one morning, he stopped to photograph the side of a barn, upon which was painted Bible verse. The prophecy of the forthcoming judgment was juxtaposed with dark thunder clouds in the Ulster sky to the west.

A couple of dozen photographs in our albums are in the friend’s style – though without his technical ability. Pictures of gates and billboards sit alongside family holiday photographs. It was the 1980s, cash being not plentiful, spending money on colour prints that were not records of anything was a pointless indulgence. Photography had always been about serious matters, family occasions, holidays, visits, important events.

The age of computer scanners and printers has brought life to old photographs. Little black and white snaps taken on Brownie or Instamatic cameras, and spending long years tucked deep in albums or in envelopes along with their negative counterparts, have made a comeback.

One picture taken around 1962-63 was probably taken by my aunt, for it is her wig that I am wearing. Unlike most family pictures, it was not in a formal or semi-formal setting, but was in the farmyard. People do not change much over the years; individuals change, but people generically don’t alter much. Hairstyles (and wigs!) may differ and in years to come the small boy’s checked trousers may look quaint, but real changes are man made.

How many corrugated iron doors will one find in in 21st Century developments? How many dutch barns are now built? What use has anyone now for a tin bath?

It would not have occurred to us to have taken photographs of the farmyard simply for having them; why would anyone have wanted such pictures when farms for miles around offered similar scenes every day? Yet were our daily lives not as important as the people we met every day?

Perhaps someone in Somerset went around taking odd pictures; pictures of doors, tubs and barns. Perhaps someone walked through bartons and cowstalls snapping away without thought for expense or criticism. Perhaps out there on the web somewhere there are recorded those things that provided a landscape for the lives featured in everyone else’s snaps. Only in retrospect are things missed, only in nostalgia do ordinary things assume a special air. Perhaps in fifty years time people will look at pictures (or holograms) of the artifacts that now surround us.