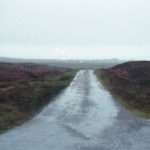 It being our wedding anniversary, thoughts turned to the family. “He’s been back at work a week now, I wonder how he is doing.”

Herself was giving out that evening, “He’s been there nearly a week now and he hasn’t made any friends”.

I had looked up at Jupiter, faint in the misty, darkening sky.

“That’s no big deal” I had replied, “I didn’t make any friends during the whole time I was at university.”

“I had thought about that” she said, “but you did meet me”.

It hadn’t been easy to recall the years I spent registered as a student at the London School of Economics, a place that for me had been the loneliest place in the entire world. “We weren’t at the same university. I had no friends in London; I hardly remember the names of the people in my year anymore”.

I had retreated into the self-deprecatory tone that always provides a safe refuge. “When I die, they will say, ‘Sure, hardly anybody knew that fella.'”

Herself hadn’t been inclined to argue.

Some people seem to dislike solitariness. It was easy to be solitary in London; no-one knew who you were and no-one cared. It was easy being solitary in theological college; I was married and it was assumed the married men stuck to their books and didn’t go out. Once ordained, the fences were easier to keep, no-one would tread on your space.

The best compliment I ever received was when my friend in the North mentioned my name to one of my colleagues, “Oh him”, the colleague replied, “he is very hard to place”. I was happy with being unplaceable; in fact, I had spent years trying to be unplaceable.

Why do people assume that you have to be a partygoer, or a socialite, or be clubbable to be happy?

In college days, there was a man who said he would like his headstone to bear the inscription, “He was a decent man”. It seemed a worthy aspiration, only surpassed as an epitaph by that of the late great Paul Eddington whose desire was that it would be said of him, “He did very little harm”. Solitariness tends to mean you can do no great harm.

I hope his first week back at work has been good, but it’s OK to live your own life; to read your books and to do your own things. It’s OK.