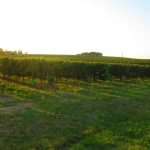 A distant storm had brought a solid front of grey clouds in from the Bay of Biscay. The weather seemed more appropriate for autumn in Ireland than September in Aquitaine. Just before sunset, the clouds broke and there were blue patches, a vapour trail from an aircraft formed a diagonal across one,and there was a sense of terrible loneliness, of being remote from the world.

Perhaps it was the vapour trail that was evocative, it recalled a moment in Connacht more than thirty years ago. The Mullet peninsula is at the extremity of Ireland, the north-western corner of Mayo, beyond it there is a great unknown, thousands of miles of dark ocean whose mood changes with the wind.  Lying on the slope of a sand dune under an August sun, the blueness above had seemed as vast as the sea that stretched to the horizon.  High in the sky, a thin white vapour trail had marked the progress of an airliner eastward towards Europe.  The moment had been tranquil, not a sound other than waves breaking on the shore.  The peace had been broken by a realization that this was the edge of emptiness: the huge sky was void except for a single aircraft.  Putting to sea, how far might one travel before being sure of encountering another human being?  The emptiness was frightening; it was time to move, time to return to the car, time to head back to the town, time to re-connect with humanity.

Emptiness is frightening. Doesn’t our fear of nothingness explain our constant striving to connect, to find meaning, to achieve significance?  If the cosmos is no more than nothingness, then ideas of there being a purpose, an end to which life is heading, are futile.  Ultimately, everything is pointless.

But should Christians really be frightened by the idea of a void? The biblical account of the origin of the Earth seeks to explain the origin of matter, it expresses no fear of the void.

The encounters with God in Scripture are most frequently isolated experiences – Jacob in the darkness of the night; Moses in the desert and on the mountain top; Elijah in the cave.  Hostile environments without human artifact; places void of meaning and threatening to life.

A fear of emptiness is not a religious sentiment, but is at the heart of a society that fills its hours with consumerism and reality television, banishing all possible space for questioning or quietness.  Believing in a void universe, a place empty of all matter, would be an advertiser’s nightmare, what point would there be in all he wishes to sell, when none of it is worth anything, when none of it has any more substance than a passing thought on an afternoon in Mayo or on an evening in south-west France?