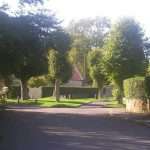 It is the primary school assembly in the morning, even in the thirtieth year of parish ministry it is still an intimidating experience. The teachers might be of the generation of our own children, but they still have the potential to evoke memories of primary school teachers fifty years ago.

There were two teachers at High Ham primary school, ladies who had devoted their lives trying to impart knowledge to unpromising children in a rural backwater. Miss Rabbage lived across the fields; the roof of her green Austin A35, parked in the road outside of her solitary house was just visible above the hedge. Miss Everitt lived five miles away in Somerton, which was such a distance for a small child in those years that it might have been a foreign country.

Only once in all the years did I ever set foot in Miss Rabbage’s garden. One summer’s day, my mother was anxious that my sister and I spend the afternoon at the school swimming pool, the worst imaginable fate for a ten year old who could not swim and who hated getting into the water, and who hated even more sitting and watching while others moved up and down the lengths with swift strokes.

“Miss Rabbage said that if we couldn’t swim we couldn’t go to the pool”, I asserted defiantly.

My mother looked at me, “Did she?”

My sister and I were marched to Miss Rabbage’s house. Standing in fear and trembling as my mother knocked at the door, we heard footsteps coming down the hall.

Miss Rabbage answered cheerily, “Mrs Poulton, you’ve come just in time. Would you pull up the zip at the back of this dress; I find I can’t reach it”.

Miss Rabbage turned her back while my mother pulled the zip on her summer dress to the top. Turning and smiling she said, “How can I help you?”

“Ian says that you told them that if children couldn’t swim, they couldn’t go to the pool”.

“Oh no”, she replied, “he has misunderstood. What I said was that if they weren’t swimming, they weren’t to come to the pool. People were coming and using the school field with no intention of going in the pool; if children are coming it must be to use the pool”.

I knew perfectly well the difference between “couldn’t” and “weren’t” and what had been the original intention of what was said; my first attempt at spinning words had ended in miserable failure.

The memory of standing in her garden that afternoon remains chiefly, not because of the unsuccessful attempt at avoiding the school pool, but because it was the moment when I first realized that teachers were also people. To glimpse beyond the outer appearance to the person beyond, in an age when baiting teachers was fair sport in many schools, was an important lesson. Real, they might be, nevertheless, for some of us, teachers are still intimidating people.