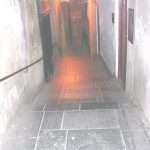 The Hallowe’en scare came from Google. Baffled that hardly anyone was reading these pages, when Saturday is usually a busy day with visitors looking for sermon ideas, a Google search for “For the Fainthearted,” brought links to the site with a note below, “This site may have been hacked.” Alarm set in, if someone had got into my pages, I had no idea how to drive them out. Having spent years trying to be careful, trying to keep everything secure; it appeared someone had got in through a window and taken up residence.

There was only one avenue open, to contact my friend Richard, who looks after various sites including that of Grandad. One of the ways the world has changed since we moved online is that normal hours have disappeared as we have migrated to a virtual existence. Despite it being a Saturday, there was a reassuring feeling that someone who combines the magical qualities of Gandalf from Tolkien with the technical expertise of Q from James Bond would be able to do something – and if he couldn’t, then things were truly bad.

Richard’s efforts took much of the day, and included a download of the entire site. Someone had found their way deep into the recesses in order to leave computer programming code in dusty corners. One of the links planted was to a site offering medications, presumably presented at a price far below that on the high street, and allegedly from a reputable country, when everyone knows the stuff is fake and comes from some corrupt little dictatorship where the same man has been president for decades.

What is baffling is that someone would use sophisticated methods to hack the blog of a country parson. Who did they think was going to be reading it? There are about 500 visitors a week, mostly people looking for church-related stuff. Much as there might be an eclectic selection of posts, most of them never have more than a handful of readers. No-one reading stuff here is going to be remotely interested in the hacker’s wares, anymore than I am likely to respond to the scammers from Cote d’Ivoire and Nigeria who claim they have millions of dollars to share. Sometimes if people applied their skills to honest effort, they might actually earn some reward for their labours.

It being Hallowe’en, the spooks and the demons are always driven out by the coming of the light, and Richard has exorcised the lurking presences among the files. If they have left a trace of their identity, they should be very afraid, a few Old Testament curses are coming their way.