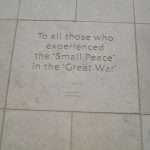 At the place in Flanders where the Great War stopped for a few days at Christmas 1914, there is now a memorial site. For a few metres on either side of No Man’s Land the trenches have been restored, the green grass has been turned into brown earth, and there is a simple memorial to the football match that took place. People leave footballs there now, and scarves and hats in the colours of their favourite teams, teams from all over Europe. In the paving around the memorial there is a stone slab inscribed with words from Michele Platini, the UEFA President, the inscription says “To all those who experienced the ‘Small Peace’ in the ‘Great War.'”

As well as footballs and team colours, there are, of course, poppy wreaths. On a label attached to one of the wreaths, last spring, there were words written from the heart of whoever had placed the wreath. “We did not want to fight you any more than you wanted to fight us.” The words had been written in 2015, but they reflected the spirit of the men who had stood on that ground a hundred years before.

“Watch out for the teachers of the law. They like to walk around in flowing robes and be greeted in the marketplaces, and have the most important seats in the synagogues and the places of honour at banquets.” Jesus condemns those who dress impressively and expect to be acknowledged by all whom they meet, not because there is anything wrong in the way they dress or in being acknowledged, but because these things are the outward appearances of men who do not value the little people, the ordinary people. “They devour widows’ houses”, says Jesus, referring to the custom of the religious leaders of exploiting the poor.

Translating Jesus’ condemnation into terms appropriate for the remembrance of all who have fallen in wars, Jesus would condemn those who allow countries simply to drift into war. A soldier friend, an officer in the British army, reminds me that it is not soldiers who start wars, it is politicians. How many of those who took the decisions in distant capitals had any real feeling for the plight of the ordinary man in the Great War? How many politicians now have understanding or care for the men they send to war today?

There was nothing wrong in holding high government office, nothing wrong with seeking to serve one’s country through political leadership, many politicians lost loved ones in the conflicts, some served both in parliament and on the front line. The wrong arose where those holding high office failed to appreciate the cost of war for ordinary people, failed to care for those whose loved ones had given everything they had.

How close the attitude of the leaders in Jerusalem comes to the attitudes of those who saw wars as about maps and numbers, those who simply did not value each of the lives that were lost. The individuals did not figure in the big scheme of things, their small contributions would have gone unnoticed. There can have been little sense of human dignity or worth amongst leaders who would throw away hundreds of thousands of lives in pointless onslaughts.

“A poor widow came and put in two small copper coins”, God remembers all who gave everything they had. 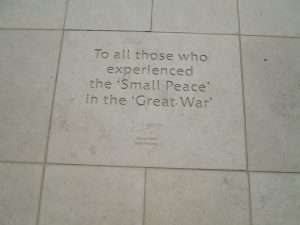