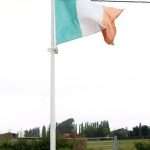 Thirty years ago is not just another country, it is another world. At a time when “desktop publishing” might refer to a hand cranked Gestetner machine in a parish office and when “online” would have been assumed to mean someone was using the telephone, publications tended to be more permanent. To bring out a book, or even a pamphlet, was a serious enterprise and things published tended to be taken seriously.

So it was that a pamphlet written in 1980 was still finding circulation in 1983, when I moved to Northern Ireland. It had been the work of someone engaged in efforts directed at peace and reconciliation and had bee published to mark the 290th anniversary of the Battle of the Boyne. The writer’s belief was that there was an opportunity in the coming ten years to make the tercentenary of the battle something other than a divisive commemoration. Of course, the Troubles ensured that the Twelfth of July in 1990 differed little from those that preceded it, there had been little possibility of it becoming different.

In 2006, with the 90th anniversaries of the Easter Rising and the Somme, there was a real opportunity for governments to work for the reconciliation of Irish in 2016. The Troubles were over, the country was prosperous, a telling of history endorsed by consensus might have been possible. Neither government has made any real effort.

Perhaps one might have expected little of the Northern Ireland government, it is still operated on the assumption that the sectarian divide excludes ordinary politics, but the Dublin government might have done better, it might have made 2016 a year in which the legitimacy of both traditions was acknowledged, instead in its plans for commemorations, it prefers to exclude those who are not part of the Catholic Nationalist narrative. Look at the planned events, if one assumed that these reflected what was happening in 1916, it would be hard to imagine that there was a world war taking place. It is as though the government feels that a nod in 2014 in the direction of the commemoration of the Great War, and the appearance of ministers at remembrance ceremony is sufficient acknowledgement of the other tradition.

And it’s not just the overlooking of the Great War that represents a missed opportunity. One of the elements of the government’s commemoration of the Easter Rising is the delivery of a Tricolour to every school, so that it may be flown next Easter, even this exercise seems to be coloured by a desire to present a particular view of history. A colleague tells of a member of the Defence Forces delivering a flag to one Church of Ireland National School and telling the pupils that the green in the flag stood for the Catholics and the orange for the Protestants, as if there could be no Protestants within the green tradition; as if there had never been Protestants who were nationalists; as if Tone, and Emmet and Parnell, and O’Casey and Blyth and Childers, and all the other Protestants who stood within the nationalist tradition had simply not existed.

Perhaps, a hundred years ago, there were some who had a better understanding of the need for a history that included everyone. The Irish Tricolour pictured here does not fly in Ireland. It stands beside a road outside of Ypres, close to Artillery Wood war graves cemetery, where the Co Meath poet Francis Ledwidge is buried. Ledwidge was a British soldier, serving in the fields of Flanders when he was blown to pieces by an artillery shell on 31st July 1917.

After the 1916 Rising and the ensuing executions, which were performed by the British army in which Ledwidge was serving, he wrote a Lament for Thomas McDonagh. The opening lines appear on the memorial that stands below the Tricolour:

Lines written to commemorate an Easter rebel used also to commemorate the soldier in the British army who wrote them. There is a better understanding of the contradictions and complexities of Irish history on a country road in Belgium than in anything that has come from the government. 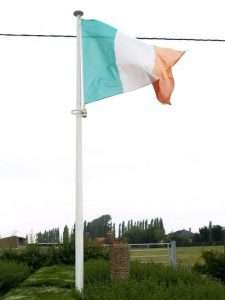