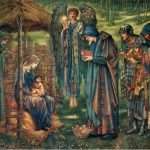 “There is Holy Communion this evening.”

“Because it’s the Epiphany.”

“The day the wise men from the East came to visit Jesus.”

A doubtful look ensued, a look that suggested that something was not quite right. There was a temptation to ask, “did you think that they came at Christmas?” The answer would almost certainly have been, “yes.” Surely the printers of all those Christmas cards could not be wrong; surely generations of school nativity plays were not mistaken when they showed the Magi following hot upon the heels of the shepherds who have come down from the Galilean hillside to the small town of Bethlehem.

Looking at a picture of Edward Burne-Jones massive canvas, “The Star of Bethlehem”, there is moment’s pondering of what it might mean to Twenty-First Century gallery goers. A fine example of a work by an artist from the pre-Raphaelite tradition, but perhaps little more.

Burne-Jones’ painting is a picture full of interest. Joseph appears to have been off collecting brushwood for lighting a fire; an axe lies beside his right foot. Mary looks sullenly, almost suspiciously, at the visitors. The baby Jesus recoils at their sight, drawing close to his mother for protection. An androgynous angel hovers, not in the sky, but a few feet from the ground, like someone who has mastered the art of levitation. Caspar has lain his crown on the ground, a mark of respect to the king he has come to visit. Melchior has a battle sword of an improbably large size, the crown in his left hand dwarfing the little jar of frankincense. Balthasar is African and looks an altogether tougher character than the wimpish Melchior or elderly Caspar.

The painting is probably one that most people now look at in the way they might look at paintings inspired by the stories from Greek and Roman civilisation, they know there is a story behind it, they just don’t know that story for themselves.

The Epiphany story has been told in churches for centuries. Perhaps there are still people who know well the verses from Saint Matthew’s Gospel, even if they think it happened at Christmas; but perhaps there are many more for whom the story has no meaning, for whom The Star of Bethlehem has become as much a mystery as the legends of ancient Greece.

For those whose work it is to tell the story of the life that includes the Epiphany, it becoming a mystery is a troubling prospect. 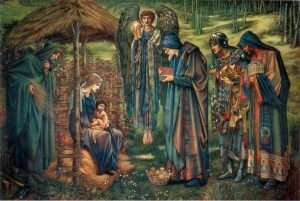