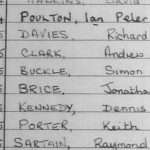 Someone from somewhere seems to have procured the school roll books, scanned the pages, and posted them on the Internet. If there has been a breach of data protection, it would seem fairly futile to complain. Given that the school closed in July 1989, the rolls must have been handed to someone for safekeeping and retained somewhere for the past quarter of a century. Perhaps after such a lapse of time there is no requirement for permission to publish details

The arrival in the school remains clear in the memory, dressed in a new blazer, trousers and shiny black shoes, and feeling conspicuous for still wearing a tie from a former school. A suitcase contained the regulation clothing and footwear. Everything was regimented, no detail of daily life was outside the school rules. Going to the assigned classroom brought comment, it had been decided to push me forward a year, “what are you doing in that class?” sneered one boy.

After attending mixed schools from the age of five, an all boys school came as a shock, an all boys boarding school an even greater shock. Even on the first day it became apparent that there were housemasters who would make strange and arbitrary decisions, who would hand out punishments in an instant for imagined misdemeanors. Being allocated to a bedroom which was shared with only two other boys brought further comment, there were boys in rooms of four, six and even eight, why had the new boy been given a place in a three-bedded room? The answer to the bedroom question was the answer to the classroom question, “I was told to go here.”

The first night, in the fifteen minutes of conversation permitted before the 9.30 pm lights out and rule of absolute silence, a roommate asked about my favourite supper. Was it a trick question? I had thought carefully about an answer, what did boys in storybooks have for supper? “Cheese on toast”, I had replied. His reply had been that I would now have to make do with plain biscuits.

Looking now at the roll book, my time there had been just two years and seven months. Images from those times loom large and vividly, they were significant times, life-changing times. Even the spartan regime of the school could not dampen the enthusiasm for the Dartmoor landscape that surrounded us; even the puritan rules could not extinguish the possibility of moments stolen with teenage girls.

The strangest thing of all is that no memory remains of 3rd June 1977.