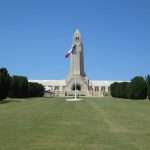 It is the centenary of Verdun, a hundred years since the first day of one of the bloodiest battles in history. Last summer was our tenth visit to the Western Front, to Flanders fields, to the rolling hills and wooded valleys of the Somme, but it was the first time to go to Verdun. The sense of the awful events that took place there is overwhelming; the Douaumont ossuary contains the unidentified remains of 130,000 men. The memorial is a sacred place; stained glass, hushed solemnity, sentries overlooking a profound silence.

Douaumont is a place where conversation seems inappropriate, where the stuff of everyday life seems trivial. If there are places on the Western Front one might see through the eyes of a tourist, Verdun is not one of them. Verdun was a place where the concept of a “war of attrition” was pursued to its relentless, bloody extreme. Verdun was the place where the men of countless small communities across France were buried in the mud. Estimates of the number of casualties vary between six hundred thousand and one million, in that total there may have been as many as three hundred thousand deaths. Philippe Pétain, commander of the French Second Army, became known as the “Lion of Verdun” because of his military leadership. Memories of Verdun brought Pétain huge popularity and in 1940 his standing as a hero meant the majority of French people accepted him as leader of the French government at Vichy which was to collaborate with the Nazi army of occupation.

Verdun shaped French history for the past century, not only for the Great War, or the inter-war period, or the years from 1940 to 1944, but also in the post-1945 era. The desire that there be no repeat of the slaughter of the previous three decades determined French policy, and the policies of the nascent European community. European integration grew not from any bureaucratic impetus, but from a profound wish that there would not be another generation of young men left lying in the cemeteries along the eight hundred kilometres of the Western Front.

Lest anyone doubt the psychological impact of the World Wars, stand at the French war memorials, not in the great cities or towns, but in the tiny villages deep in the Midi. Count the names and try to estimate the impact of such losses; look at the pristine condition of the stones, a century after the events; watch the solemnity of the commemorations.

Critics sceptical of the European Union might stand at Verdun and ponder what Europe was like in former times. 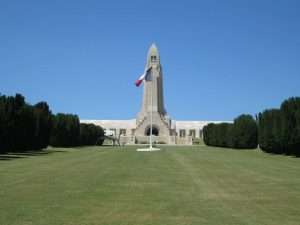