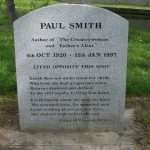 The bruises may fade but the invisible scars remain. A good job and a good life in England forsaken to return to 1950s Ireland. He was said to have been a handsome man, a great man for the dances. He must have possessed some attraction to lure her from her life of independence, a life which offered prospects she might never have imagined, a life where she had money in her pocket. Her life became one of rural poverty, but worse than that, it became a life of abuse, verbal and physical assaults. Never would she have complained about what had happened, who was there who would have spoken for her? Who would have said a word against him, wasn’t he a decent man?

His death brought respite, but never healing. It is hard even to know what healing would mean.

It is thirty years since I read Paul Smith’s novel The Countrywoman. The relentlessly bleak tale of a woman subject to the abuse of a loathsome husband now seems more a work of social history than one of fiction. Pat Baines may have been the abusive husband and father to a Dublin family, his attitude and behaviour might just as easily have been those of a man on a small farm in rural Ireland:

Three things contrived to go wrong with Pat Baines that Saturday. The first was when the ward sister came up to where he lay on the broad of his back in the corner bed in St. Jude’s and told him in her concise voice that it was time he got up and out as they needed his bed. The second was that the minute the news of his departure spread from bed to bed and even across the landing into the next ward, men came running with demands for payment for tobacco and newspapers that he owed them. And this led up to the third, because by the time he met their demands, which were small but many, he had exactly one penny left out of the seven-and-six relief money that Mrs. Baines had collected the day before and sent up to him by Neddo. The result of his having no money meant that he had to walk all the way from what was called Number One James’s Street past endless pubs in Thomas and Francis streets through the Coomb,  lined with more pubs, even past those in Kevin and Camden streets where on other days he had lorded it grandly while he downed whisky faster than the barman could pour it. But today he was forced to walk by them without as much as a drink of water passing his lips, although at a couple of pubs where he con­sidered he was well known enough to be able to run up the price of a couple of drinks until another day, the barmen had politely refused, pointing out in case it had escaped his notice the cardboard propped against a row of bottles: “Do not Ask for Credit as a Refusal Often Offends.” Pat Baines was offended and said so but was unable to do anything other than mutter a cursed advice as to what they might do with the drink they refused him.

As usual he considered that his wife and children were responsible for the torture of his walk from the Union and for his agony of longing for even one drink. Filled with resentment, he kaleido­scopically attributed the rest of his bad luck to them also, starting from the moment the nun asked him to leave the hospital up to the last barman’s rebuff. It never dawned on him that his wife and children were more unaware of Sister Eustace and her existence than she was of theirs, or that even if they were not, they were still as powerless about getting him asked to leave as her decision that he should do so was unquestionably final in its authority. It would have suited him to lie up another week in his bed in the corner with nothing to do all day but sleep, eat and read and be waited on hand and foot by the remnants of men who for one reason or another found existence within the prisonlike walls surrounding Number One easier than trying to live outside.

Sometimes the truth is even worse than fiction. 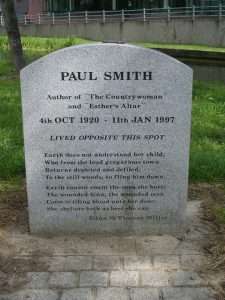