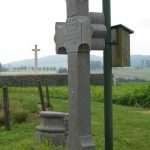 The grave of Major Willie Redmond MP, brother of John Redmond who was the leader of the Irish parliamentary party, and a leading Irish nationalist in his own right, is currently alone in a field outside of the village of Loker in Belgium, where Major Redmond died on 7th June 1917, the first day of the Battle of Messines.

Major Redmond believed in the rights of small nations and believed that the European war that began in August 1914 was a war for such rights. Speaking in Cork in November 1914, he said,

“I speak as a man who bears the name of a relation who was hanged in Wexford in ’98 – William Kearney. I speak as a man with all the poor ability at his command has fought the battle for self-government for Ireland since the time – now thirty two years ago – when I lay in Kilmainham Prison with Parnell. No man who is honest can doubt the single-minded desire of myself and men like me to do what is right for Ireland. And when it comes to the question – as it may come – of asking young Irishmen to go abroad and fight this battle, when I personally am convinced that the battle of Ireland is to be fought where many Irishmen now are – in Flanders and in France – old as I am, and grey as are my hairs, I will say, ‘Don’t go, but come with me.’”

In a note attached to his will, Major Redmond stated, “I should like all my friends in Ireland to know that in joining the Irish Brigade and going to France I sincerely believed, as all the Irish soldiers do, that I was doing my best for the welfare of Ireland.”

The significance of Major Redmond, and of his grave, was acknowledged in December 2013 when it was visited by Taioseach Enda Kenny and the British Prime Minister, David Cameron. The Taoiseach commented, “The thought crossed my mind standing at the grave of Willie Redmond, that was why we have a European Union and why I’m attending a European Council.”

The Battle of Messines was a symbolic moment, Irishmen from the 16th (Irish) Division and 36th (Ulster) Division stood shoulder to shoulder for the first time. It is the battle that provided the inspiration for the Peace Park at Messines, opened by President McAleese, Queen Elizabeth and Albert, King of the Belgians, in 1998.

As the centenary of the Battle of Messines approaches on 7th June 2017, and with it the centenary of the death of Major Willie Redmond, it would seem an appropriate time for there to be a gesture of reconciliation, for those who went to Flanders and France to be accorded a respect equal to that accorded to those who took part in the Easter Rising in Dublin.

Major Redmond’s remains might have been reinterred in a Commonwealth War Graves Cemetery, but his family expressed the desire that the grave would remain where it was, in the care, at the time, of the nuns of Locre Hospice. Major Redmond embodied the tensions and contradictions within Irish politics; his grave is a continuing symbol of the unreconciled nature of Irish history.

As Irish patriots who died in 1916 were re-buried with full honour, might Major Willie Redmond be brought home to his native Wexford and become a sign not of contradiction, but a sign that Ireland cherishes the memories of all her children equally? 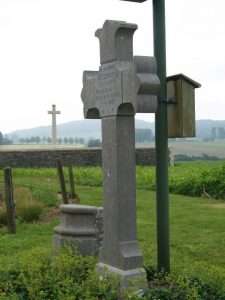