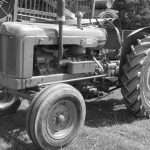 A smell not of May, but of August: heavy, thundery air and a scent of the contact of hot machinery with dust. Perhaps it was not so unusual, weren’t thunderstorms in May frequent enough, certainly this year that have been common, and wasn’t May the month when farm and garden machinery came into full use?

Pausing to ponder, the smell was identifiable by the noise of the machine, someone working with a petrol-driven strimmer which must have disturbed dry debris and raised dust that had fallen on the exhaust.

The memories of August days came flooding back, the smell was one that might have come from the dust stirred by haymaking or harvesting descending on the machines being used for the work. The machines were old, nursed along by affection and necessity. Sometimes things would slip, shear, break; running repairs were accepted as a normal part of the working day.

Once my grandfather had brought the reaper-binder to a field of barley, two or three men with him to assist with the harvest. It was a labour intensive business, one man to drive the Fordson tractor, one man to operate the binder, one or two men to follow behind, picking up the sheaves and putting them into stooks. It was a day that could not be lost, for the other men had their own work to do.

Hardly had the day started when the binder stopped. The blades were not working, the barley was not being cut. Long years of experience allowed my grandfather to at once know the cause. As he corrected the fault, something slipped and he gashed his hand. A handkerchief was taken from his pocket to cover the wound, he tied it around with binder twine and the day’s work proceeded.

By the end of the day, no part of the handkerchief was left white. Returning to the farm at evening time, my father was waiting to collect me. Seeing my grandfather’s hand, he suggested a visit to the local doctor’s surgery, where emergency attention for local farmers was part of the everyday activity. The cut required fourteen stitches to close it. It was a matter of fact, not something for comment: we did not mention it.

My grandfather was one of those few farmers who actually retired, though his death at the age of seventy-seven meant there were not many years away from the hard daily labours of the land. He would probably have enjoyed the scent of August in May, an augur of a good summer. 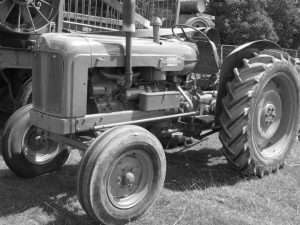