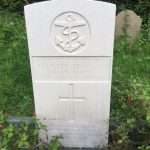 There was a sufficient chill in the evening air to pull on the pullover that had been brought only as an afterthought. There had been an intention to take a long walk on a fine June evening, but there were also telephone calls to make. Walking more slowly meant catching sight of a footpath that must have been passed on previous walks. It shortened the planned circuit considerably, emerging at the back of the churchyard of Saint Deiniol’s Chuch in Hawarden.

An incoming call meant lingering in the graveyard, where no-one would hear the conversation, and catching sight of a signpost for a “Crimean War Grave,” the grave was not found, but at the western edge of the churchyard, among graves of members of the Gladstone family, there was a grave from the Second World War. It spoke of family heartbreak, two sons lost, one at the age of 20, the other at the age of 27. The inscription reads:

The gravestone was in the unmistakeable style of the Commonwealth War Graves Commission. Sure enough, the two sons are listed on the CWGC website, it being noted that John Neville Woodbine Parish is buried at Saint Deniol’s Churchyard, while his brother David Francis Woodbine parish was commemorated on the Malta Memorial. They are recorded as the sons of Lt.-Col. Francis W. Parish, D.S.O., M.C., and of Dorothy Parish, of West Brompton, London.

The War Graves Commission entry for David shows him as flying with 236 Squadron of the Royal Air Force, which is odd, because 236 Squadron does not seem to have operated out of Malta, flying instead over the seas around Britain.

What caught the eye about the gravestone, though, was the detail it showed concerning John. H.M.S Heron is not a ship, it is a Royal Naval Air Station, it is RNAS Yeovilton in Somerset. It is where my father served for more than two decades.

A search for “HMS Heron” and “17th May 1941” revealed the story behind the death of John Parish. A naval history website shows:

759 Squadron of the Fleet Air Arm was the naval fighter school. Young John Parish had been killed in training.

The Commonwealth War Graves Commission headstones have a great dignity, it is hard to imagine the pain they represent. In the years that followed, what did Francis and Dorothy Parish think as they stood in a quiet corner of a North Wales churchyard? 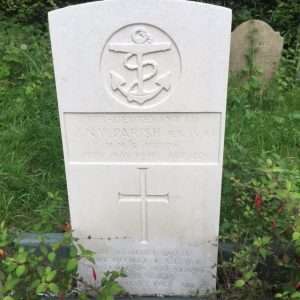