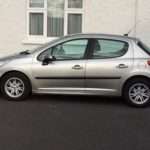 The car needs new brake discs. Eric, the long-suffering and ever reliable mechanical genius, has them ordered and they will be fitted on Tuesday morning. It is hard to remember if they will be the second or the third replacement set. The car is on its second clutch, its third timing belt, and its countless sets of new tyres. The odometer shows nearly 324,000 kilometres, more than 280,000 of those added since I bought the car at three years old in April 2010. It is a total that is modest compared with the 2002 Skoda Octavia displayed at the 2014 National Ploughing Championships, which had covered 825,000 kilometres, but for a small, badly driven car, it is not a bad total.

The Peugeot 207 was bought after careful search of the Internet, from a dealer who dealt generally in high performance vehicles and wanted rid of the small car that sat among its high powered, high specification, expensive companions. The dealer wanted €7,950, he took €7,700. It has proved to be one of the best buys I ever made. Of course, it could do with a good valet; of course, it has picked up a few bumps and scratches; but it has never failed. Even running for six years on whatever diesel was the cheapest, it has stuttered only once, and that due to some environmental filter that was a requirement for emissions purposes, but wasn’t actually necessary to the functioning of the car.

There is almost an inverse snobbery in being able to say how little the car has cost if one spreads the buying price over the years during which it has travelled the roads of Laois and Offaly. It would be hard to imagine buying a car for €1,300 and expecting it to cover 40,000-50,000 kilometres in a year without being constantly worried that it might somewhere come to an unanticipated halt.

Of course, being able to drive cheaply was only possible because of having the cash to buy the car in the first place, being able to write a cheque for €7,700 when the opportunity came to buy the car at a knockdown price. It is always those with money who can live the cheapest, whether it’s through having a credit card for online purchases, buying in bulk, accessing credit, or accumulating loyalty bonuses, it is those who have the most who are able to afford to spend the least.

Frugality may be a virtue; it may also be a lifestyle choice. 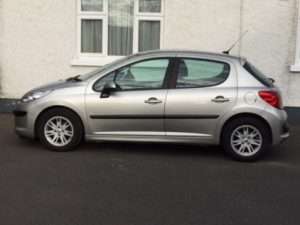