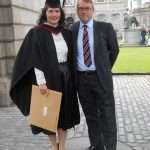 B.A (Bachelor of Arts), M.B. (Bachelor in Medicine), B.Ch. (Bachelor in Surgery) and B.A.O. (Bachelor in Obstetrics). It was commencements day for the graduating students of Trinity College, Dublin’s medical school last Friday. The graduation ceremony was a fine affair, conducted in Latin as is the tradition of the university. There was a reception afterwards and a grand dinner in the Shelbourne Hotel in the evening. Standing with our daughter Miriam as photographs were taken, thoughts wandered to my grandfather and his mother Ellen Miriam, whose middle name we only discovered in recent years.

Sidney Herbert Poulton was born in a workhouse in Brentford in west London one hundred and ten years ago. His mother, Ellen Miriam Poulton, who was born on 4th July 1888, was eighteen years old when he was born; no father’s name is recorded on the birth certificate. The spelling of her name seems to change between her childhood years with her parents in Kent, when she was “Poolton,” and the birth of my grandfather in November 1906 when she is “Poulton” and is recorded as a machinist from Chiswick. Ellen seems to have had two more children, Ida who was three years old at the time of the 1911 Census and Stanley who was a year old.

In the 1911 Census, Ida is with her grandmother. There is no trace in the census returns of either Sidney or Stanley, who must have been in care somewhere, for at the time of the census Ellen Miriam Poulton, was twenty-three years old and, with four hundred and fifty others, was an inmate of Wandsworth workhouse. Ellen died on 3rd March the following year, her death certificate records her as “Ellen Miriam Poolton.”

Whether Poulton or Poolton, the thought occurred on Friday, that it would seem appropriate to go to her grave. Of course, there would be no headstone, “paupers’ graves” were generally unmarked, who would there be who could have afforded a memorial of any sort? Perhaps the workhouse had a cemetery that might be visited. Perhaps there were written records of where burials had taken place.

An Internet search quickly disabused me of any notion that it might be possible to visit the spot where the mortal remains of Ellen Miriam had been laid to rest. Burials from the Wandsworth workhouse, in common with those from other workhouses, were third class burials. The coffins were taken by train to the vast Brookwood Cemetery in Surrey. The line was known as the “Necropolis Railway”, the cemetery had its own halt and sidings. The “paupers” were buried in an area where graves are now only distinguishable by shallow indentations in the surface, though at least at Brookwood they were accorded the dignity of individual graves. A note on one of the websites says the records of the burials were destroyed during bombing in the Second World War.

Not only is there no grave to visit, there is not even an approximate area where it would be possible to stand and ponder. I am sorry, it would have been good to have been able to stand and say that the names “Miriam Poulton,” once part of an entry in a workhouse register, were now the names of a doctor on the medical register. 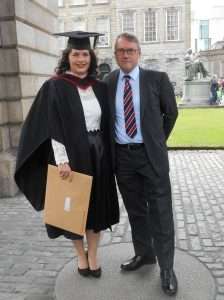