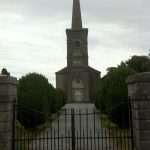 The spire of Coolbanagher church was silhouetted against a grey July evening sky. Passing it by on the road toward Portlaoise, a name could not be recovered from the recesses of the memory. “The architect responsible for that church was famous, I think. He was built one of the big Dublin buildings. I wish I could remember his name.”

“It wasn’t that Edward man?”

“Lutyens? No, sure, he would be the wrong century completely.”

“Look it up on your phone.”

“No, that would be cheating. I’ll think of his name.”

We dropped down onto the old Dublin to Limerick road; it is hard to imagine that until recent times it was a national arterial route, there were no more than a couple of cars to be seen. Reaching the motorway, the name of the architect could still not be recalled. That it had two syllables and ended with “n” was all I could manage to remember, but how many thousand surnames have two syllables and end with “n?” A large number of Irish names and an even larger number of English ones would probably match such criteria.

The car thermometer showed the temperature outside as fourteen degrees, hardly warm for a July evening. What had happened to the old summers? When it gets warm, there is no place in the country warmer than this place equidistant between Dublin and Limerick, but it is forty years now since the great heatwave of 1976 and seeing its like again seems an unlikely prospect for any time to come.

The M7 motorway cuts through the landscape now, most drivers probably pass unaware of which county through which they are driving. The road passes through rural parishes without striking features, no steep hills, no deep valleys; undulating lowland, green pasture, ripening corn. The blue signs announce the junction for Cork is ahead.

However deep the darkness of the evening, there was an irrepressible sense of exuberance. It was the first week of July, the school year finished last Thursday. The roads are quiet, journey times are shorter, people are under less pressure. Eight weeks of contentment among younger people, a mellowness among many of the older ones. Eight weeks and then the annual holidays, taken in September because cover is more easily obtained once autumn comes; just fifty-five days before departure.

There is an annoyance, though, that the architect’s name cannot be remembered. Eventually, resort is made to the Internet: two syllables and ending with “n,” James Gandon. Not just one major Dublin building, but three, the Custom House, the Four Courts, and the King’s Inns. 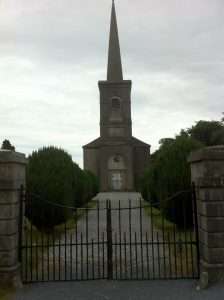