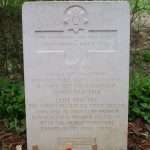 Histories of the Battle of the Somme tend to tell us that the British were shocked at how the first day unfolded. Were they really? Surely, the commanding officers knew that the shrapnel rounds the artillery were firing were ineffective against barbed wire? Surely, they knew that French artillery fire was much more concentrated than that of the British? Surely, they heard the reports from aerial reconnaissance?    Captain Duncan Lennox Martin of the 9th Battalion of the Devonshire Regiment knew what was going to happen. Martin Middlebrook’s The First Day of The Somme describes how Lennox Martin, in the weeks ahead of the battle,  had reached the awful conclusion about what awaited:

“A few soldiers were still able to come home on leave, among them a Capt. D.L. Martin, a company commander in the 9th Devons. He took with him a large scale map of the area his company was to attack:  some German trenches in front of Mametz. While on leave, Capt. Martin, an artist, amused himself by making a plasticine model of the battlefield. The longer he looked at the model, the stronger his feeling grew that if and when his company advanced over a small rise by some trees called Mansel Copse, they would come under fire from a German machine-gun position built into the base of a wayside shrine in Mametz. On his return he showed the model to his brother officers and told them of his forecast”.  The First Day of The Somme, p.86

At 7.30 am, on 1st July 1916, what did Lennox Martin say to his men as the attack began, as he realized his prediction would be fulfilled?

With which officers did Lennox Martin share his thoughts? Lieutenant William Noel Hodgson, the officer responsible for ensuring that members of the 9th Battalion of the Devonshire Regiment were kept supplied with grenades seemed aware of the fate that awaited. On 29th June, Hodgson, the son of the Bishop of Saint Edmundsbury and Ipswich and a man whose faith seems to have endured the horrors of the Western Front, had published, under the pseudonym of Edward Melbourne, a poem called “Before Action”. He seems as certain as Lennox Martin of what was about to happen.

If we know how Duncan Lennox Martin and W.N. Hodgson might have felt, then what about Private John Milford,  an eighteen year old from Kenn, outside of Exeter, or 41 year old Private James Carter, a man twice the age of some of those around him, or Lawrence Williams, a sergeant at just nineteen? What did they feel?

The Devonshire Cemetery at Mametz is one of the most moving places on the Western Front, a memorial stone declares, “The Devonshires held this trench; the Devonshires hold it still.”  Below the cross at its top, the memorial gives details of the events of 1st July 1916:

The burial took place not on the evening of the awful first day of the Somme, but three days later, after the bodies had been retrieved from where the men had fallen. But does it matter that the details are not correct?  Are there other truths that are more important? When the conventional histories leave out the expectations of what would happen, a wrong date for a burial seems a very trivial matter. 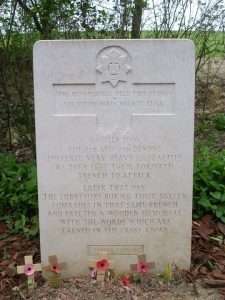