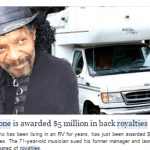 Social media can be like village gossip, stories from the past that have been long forgotten can be suddenly revived and presented as new; so it is that a February 2015 report has been circulating on Facebook this week. Sylvester Stewart, better known as “Sly Stone” from the music group “Sly and the Family Stone” had been awarded $5 million in unpaid royalties. The report said that Stewart had, as a matter of choice, been living in a camper van in recent years.

Sly and the Family Stone are not the first band most people would name in association with Woodstock, yet Rolling Stone magazine, as definitive a voice as for which one might hope in the polemical world of rock music, carried a review:

“As the night wore on, it was the Battle of the Bands; Grateful Dead, strained after Canned Heat, climbed out onto a limb with hopes that the audience would reach up to them; it didn’t. Creedence Clearwater, clear and tight; a static Janis Joplin, cavorting with Snooky Flowers, her back-up band just that; Sly and the Family Stone, apart in their grandeur, won the battle, carrying it to their own majestically freaked-out stratosphere.”

Among iconic names in the history of rock music, they were “apart in their grandeur.” When names like Jimi Hendrix and Janis Joplin are recalled, how many are there there who still recall Sly Stone?

The political populism that dominates politics on both sides of the Atlantic owes its rise to a sense of alienation among ordinary people, a sense of anger that they have been left unrewarded, unacknowledged, unrecognized. Populism thrives when it becomes the voice of the politically frustrated, the forgotten. The story of Sly Stone is a story the media presented as being of a man who had been forgotten by the justice system, the story of a man unfairly treated by establishment figures; whether or not it corresponds with reality, it is a story with which many would identify. 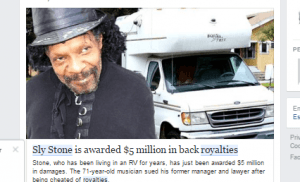