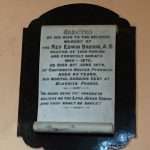 On the wall of Saint Andrew’s Church in the Co Laois town of Rathdowney, there is a memorial tablet to a former incumbent. Such memorials to rectors are common, but a memorial to a rector who died in the Pyrenees must be something unique. The tablet gives no information regarding the circumstances of the unfortunate Mr Bredin’s death:

Perhaps there would be some clue as to what happened in”Clergy of Ossory,” a weighty tome providing biographical notes on centuries of clergy. Its entry on Edwin Bredin has a paucity of detail.

An Internet search provided little more by way of information. Bredin was not one of those rich clergy who could afford to pay a curate while he himself passed much of the year in the sunshine. The value of the living is recorded as being £115 per annum, not the sort of income that allowed one to be an absentee parson who lived in Biarritz.

Notes on the Goodreads website ,on the writer E.M. Channon, Bredin’s daughter, offer some clues about the family’s circumstances:

Born in 1875, in Rathdowney, Ireland, Ethel Mary Bredin was the daughter of the Rev. Edwin Bredin. Upon the death of her father, when she was four years old, Bredin and mother went to live with relations in England. She was educated at St. Leonard’s Ladies’ College, and for one year, at Cheltenham Ladies’ College. In 1904, she married the Rev. Francis Granville Channon, and settled with him at Eton, where he spent most of his working life. They had six children. Channon began to write and published after she was married, for the pleasure of it, and to supplement the family income. She retired, with Rev. Channon, to Bucknell, Shropshire, in 1932, and died there, in 1941.

Bredin was obviously not a man of such substantial private means that his wife could continue to live independently after his death, so how did he come to be in the Pyrenees in times when few clergy would have travelled outside of the country?

Cauterets is now a spa town and ski station, in Bredin’s time it was at the height of its fame as a spa; Napoleon III and the Empress Eugenie had visited some twenty years prior to his visit. The town had been reached by the railway in 1871 and its hotels had the elegance of the Belle Époque. But what took Bredin there?

Had he spent much of his modest income journeying in search of a cure? Had he suffered respiratory illness that might have found relief among the air and waters of the Pyrenees? Why did no-one think to record on the plaque why he had made that last fateful journey? 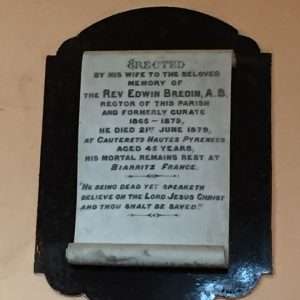