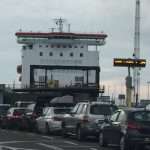 A constant line of vehicles passes the crossroads, while overwhelmingly Irish registered, there is the occasional British or Continental plate. Three coaches drive in convoy, a board in the windscreen of one declares their destination to be Bantry Bay: a fine time of the year to be going there, the fuschsia will be adding a pink hue to the hedgerows and ditches.

Upon reaching the port, the number plates are yellow, hardly an Irish vehicle in sight. The accents are those of southern England, leaving their vehicles, they wander around the waiting area as if sufficiently wishful thinking might change Rosslare Harbour from a desolate patch of concrete and tarmac into somewhere that might have something of interest to be viewed by those who have arrived an hour early for the sailing. Parents walk along with children bored at having travelled, perhaps for hours, to be standing inside a metal-fenced compound. Those who complain about airports should travel by ferry more often, airport terminals are the embodiment of convenience and variety when compared with the typical facilities of a ferry terminal.

There is a quietness around the place. It is not yet eight in the evening but seems later. Perhaps it is the subdued mood of those travelling, presumably they are travelling tonight so as to reach home on the morning of the English August bank holiday. How many of them are returning to their work on Tuesday? What thoughts do they have as they wait to board the vessel that will take them to their island home? There is a fascination in watching faces, expressions, listening to tones of voices. Homeward journeys at the end of holidays can be sombre affairs, there is little sign of the sort of cheer and exuberance that might have marked the outward travelling.

Four weeks summer holiday was the norm in the North and in Dublin, but in the country, the practicalities and the expectations are such that telling someone of a four week absence brought a look that suggested such a thing must be contrary to nature, if not actually illegal. 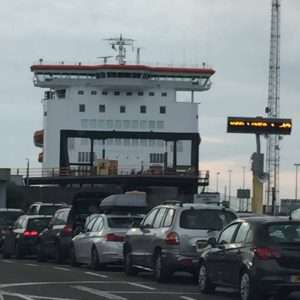