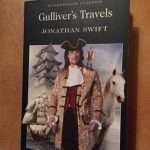 Of course, I knew Gulliver’s Travels, who didn’t? Our teacher in primary school used to read to us the tales of Gulliver in the land of Lilliput, though reading it for myself today, I realise that the version read to us must have been much edited, Swift’s more earthy references would have been kept from young ears (however, being country children, we would have probably have take delight that someone so polite could have made spoken as might adults in our own community).

Gulliver’s Travels for me was the story of the giant Gulliver among the tiny Lilliputians, there was a vague awareness of another story of him being in a land of giants, and there, I thought, the story concluded. I had never heard of the Houyhnhnms, the horse civilisation in the fourth book, who occupy a world they share with beast-like humans called Yahoos. Perhaps the tale of the Houyhnhnms was too cerebral for young minds, perhaps it contained too much coarseness, perhaps, also, it was just too political, too challenging of the assumptions with which we grew up.

I was at much pains to describe to him the use of money, the materials it was made of, and the value of the metals; that when a Yahoo had got a great store of this precious substance, he was able to purchase whatever he had a mind to; the finest clothing, the noblest houses, great tracts of land, the most costly meats and drinks, and have his choice of the most beautiful females. Therefore since money alone was able to perform all these feats, our Yahoos thought they could never have enough of it to spend, or to save, as they found themselves inclined, from their natural bent either to profusion or avarice; that the rich man enjoyed the fruit of the poor man’s labour, and the latter were a thousand to one in proportion to the former; that the bulk of our people were forced to live miserably, by labouring every day for small wages, to make a few live plentifully.

I enlarged myself much on these, and many other particulars to the same purpose; but his honour was still to seek; for he went upon a supposition, that all animals had a title to their share in the productions of the earth, and especially those who presided over the rest. Therefore he desired I would let him know, “what these costly meats were, and how any of us happened to want them?” Whereupon I enumerated as many sorts as came into my head, with the various methods of dressing them, which could not be done without sending vessels by sea to every part of the world, as well for liquors to drink as for sauces and innumerable other conveniences. I assured him “that this whole globe of earth must be at least three times gone round before one of our better female Yahoos could get her breakfast, or a cup to put it in.” He said “that must needs be a miserable country which cannot furnish food for its own inhabitants. But what he chiefly wondered at was, how such vast tracts of ground as I described should be wholly without fresh water, and the people put to the necessity of sending over the sea for drink.” I replied “that England (the dear place of my nativity) was computed to produce three times the quantity of food more than its inhabitants are able to consume, as well as liquors extracted from grain, or pressed out of the fruit of certain trees, which made excellent drink, and the same proportion in every other convenience of life. But, in order to feed the luxury and intemperance of the males, and the vanity of the females, we sent away the greatest part of our necessary things to other countries, whence, in return, we brought the materials of diseases, folly, and vice, to spend among ourselves. Hence it follows of necessity, that vast numbers of our people are compelled to seek their livelihood by begging, robbing, stealing, cheating, pimping, flattering, suborning, forswearing, forging, gaming, lying, fawning, hectoring, voting, scribbling, star-gazing, poisoning, whoring, canting, libelling, freethinking, and the like occupations:” every one of which terms I was at much pains to make him understand.

“The bulk of our people were forced to live miserably, by labouring every day for small wages, to make a few live plentifully.” Swift may have wondered why little had changed in the three centuries since he wrote of the Houyhnhnms. 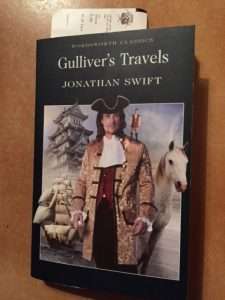