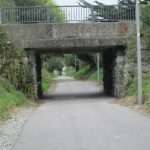 The railway line from Waterford to Dungarvan closed in 1967. In recent years, the trackbed from Ballinacourty toward Dungarvan has become the foundation of a popular footpath from the area of Clonea Strand into Dungarvan town. This year a greenway has opened, stretching more than forty kilometres from Dungarvan to Kilmeaden to the west of Waterford city.

The walk from Ballinacourty to the town has become a favourite moment during free time at our annual diocesan clergy gathering. At low tide, one can stand on a causeway watching the innumerable waders that gather on an autumn afternoon, curlews and redshanks and godwits, joined by a couple of herons,  a handful of mallard, and aggressive, noisy gulls. Perhaps a train journey across the causeway would have put the birds to flight, the sound of machinery causing alarm.

Heading toward the town, the line moved away from the shore passing through cuttings as it drew closer to the station. Following the former line, the footpath becomes an altogether more prosaic experience, a plain straight path between grass banks. Walking under one of the bridges, there was a moment to ponder what those who stood on the bridge might once have seen. The 1922 edition of Bradshaw’s Railway Guide shows there were nine departures a day from Dungarvan, four “up” services, toward Fermoy and Cork; and five “down” services, toward Waterford. Did people once stand and watch as locomotives drew carriages and wagons along the line? Were the staff of the stations and the train crews well-known members of their local communities?

Railways were a collective activity, they created a feeling of community among those who participated. Footpaths and greenways are laudable, but they are, for the most part, things of individual leisure. Of course, the railways closed because individual choice was much better served by road transport, we could go where we wished, when we wished, and need have no concern with timetables, or sharing a carriage with strangers.

There is a sense of sadness walking along the tarmac which conceals the trackbed. The fate of the railways is representative of the trend within wider society, a trend toward individualization, a trend toward a breaking of the links of inter-dependence, a trend toward the erosion of community ties. Individual choices make us all consumers with no expectation other than that we will spend our money where we wish. Individual freedom comes at the cost of the decline of a society which demanded co-operation and encounters with those whom we did not know.

Railways were about more than trains. 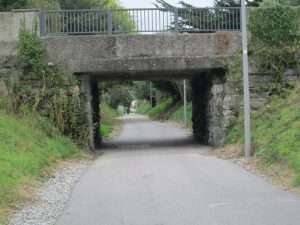