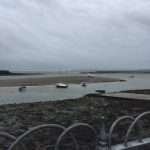 “Could you sit for an hour looking out at the water?” The lady well into the tenth decade of her life looked at me earnestly. An honest answer would be required to the quite unanticipated question. It would probably not be the answer that the lady might have expected.

“I could,” I said, “I could sit on a bench and look out over the sea for an hour and not worry about the time.” The lady gave me a quizzical look, almost as though I had said something outrageous. Having lived almost four decades longer, perhaps she wondered what sort of people the younger generation were becoming.

“I couldn’t,” she said, “I would have to be doing something.”

Perhaps I should have admitted to being an instinctively lazy person, content to find any reason not to do the things that need to be done. (Expected to present a paper at a symposium in Wales in two weeks’ time, not a word has yet been written, there has been an abundant supply of reasons for procrastination.)

The diocesan clergy conference gathered yesterday at Ballinacourty outside of Dungarvan in Co Waterford. Meeting for three days each October, the Tuesday afternoon is left as free time, people sleep, or talk, or read, or go for a walk or drive.

The walk into Dungarvan takes an hour, along the path that follows the course of the old railway line. Arriving in the town at three o’clock, the Best Beloved declared a wish to browse the shops; we agreed to meet at four o’clock and went separate ways.

Following the harbour wall, a point is reached where there is a view down toward the estuary. The council have thoughtfully provided benches upon which someone intent on looking out at the water can simply sit and pass the time. It wasn’t the best time to sit there, the sky was grey, the tide was ebbing and there was a cool breeze, but it was tranquility.

Sitting in Dungarvan, a conversation heard years past in the North came to mind.

“Heaven?” said the pastor, “Heaven for for me will be standing with my dog on a bridge in one of the glens of Antrim; just standing there looking down the glen. And someone will come up and say, “What are you doing?”

And they’ll say, “Are you standing here long?”

And I’ll say, “Ach, no, not more than ten thousand years.”

What’s heaven like? Maybe it’s like sitting on the harbour wall in sweet Dungarvan town doing no more than just watching the water. 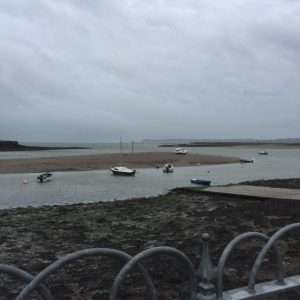