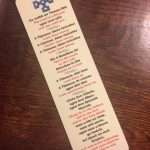 Advocates of the Irish language in the diocese have produced a bookmark that has been circulated to the clergy, it is printed with key phrases from the liturgy. It is suggested that it might be used to introduce Irish to Sunday worship. It is a commendable effort, the problem comes with those of us who have little idea as to how words are pronounced and whose congregations would have little idea of how to respond.

I would be pleased to be able to read the bookmark. I have a Duolingo App on my iPhone with Irish included, but struggle with even basic phrases. When we moved to Dublin from Northern Ireland in 1999, there seemed no opportunities for newcomers to learn what was presented as the first national language. There seemed no provision for those who had not learned Irish from primary school onward. Unlike those who who would dismiss the language as an expensive and futile luxury, I believe the loss of language is more than just the loss of a cultural artifact.

Back in the early 1980s, a friend in college was from North Wales. He had been a monoglot Welsh speaker until the age of 14. His family had lived on a peninsula and they had no television. Primary and secondary schools had been Welsh speaking. In a reverse of what had happened in previous generations, he remembered with anger a teacher who had repeatedly mocked an English speaking pupil. He had come to Dublin expecting a place as Celtic as the Wales he had left. Wales was under English rule; Ireland had been independent for sixty years, time enough to secure language and culture. He was disappointed at what he found; Dublin had been infected by what he called “plastic American Euro-culture.” He would have been dismayed at Ireland that developed in the decades that followed. He would have felt that his “plastic American Euro-culture” hadn’t just infected the country, it had colonised almost everywhere.

There would be people I knew in the North who would be delighted at the loss of language; I can hear a bitter woman I once knew talking about, “them ones down there an’ their silly language.” As a Christian, I think the loss of the Irish language is a serious matter. The plastic American Euro-culture that my Welsh friend so much disliked is mediated through the English language – Mammon speaks English! The Irish language is a bulwark against the globalised materialism of the mass media and multinationals. Perhaps there aren’t many people who would want to return to the vision of Ireland articulated in de Valera’s 1943 Saint Patrick’s Day address, but does anyone really want a country entirely devoid of character where leisure time is spent in shopping malls and where identity is solely perceived in what you have and what you can buy?

Irish is a defence against a world where McDonald’s counts a cuisine and where Soaps count as culture. Can anyone teach me the words on the bookmark? 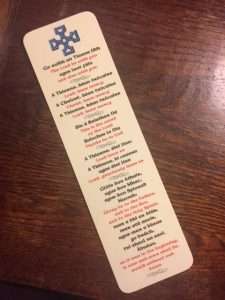