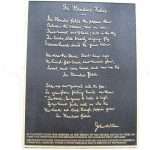 Robert Fisk wrote in Saturday’s Belfast Telegraph that the “poppy is (a) symbol of betrayal.” It was not the wearing of the poppy in particular situations to which he referred, but the wearing of the poppy in general. Fisk’s implies that those who wear the poppy are guilty of betraying the memory of those who died in the mud and excrement and blood of the Western Front, pointing to the poppy being inspired by John McCrae’s poem In Flanders’ Fields, “a poem which urged the soldiers of the Great War of 1914-18 to go on killing and slaughtering.”

Having visited McCrae’s memorial at Essex Farm Cemetery outside of Ypres a number of times, only the opening lines of poem are ever remembered and the offending lines that encourage a continuing struggle are rarely recalled by anyone. Few people would even be aware of that the poetic inspiration for the poppy included an aggressive element, and the fact that the lines found resonance after the war only arose because of the poppies’ frequent presence. In All Quiet on the Western Front, the German writer Erich Maria Remarque wrote:

The grasses sway their tall spears; the white butterflies flutter around and float on the soft warm wind of the late summer. We read letters and newspapers and smoke. We take off our caps and lay them down beside us. The wind plays with our hair; it plays with our words and thoughts. The three boxes stand in the midst of the glowing, red field-poppies.

Writing of the television presenters wearing the poppies, Fisk says, “The television bumpkins only shed their crocodile tears for the dead of World War I and II, who were (save for a colonial war or two) the last generation of Britons to get the chop.” It seems presumptuous to know what other people do or do not feel, and is he really implying that none of the journalists working for the television channels have an awareness of the injustice and tragedy of wars beyond the two world wars?

Fisk says his father “abandoned the poppy charade when he learned of the hypocrisy and lies behind the war in which he fought.” No-one would dispute that the war rested on hypocrisy and lies, but the poppy has become a symbol with which to keep alive the memory of the millions of ordinary men and women, it has become a way of thinking about each and every one of them. There are undoubtedly many among the Establishment who would prefer the remembering of the dead would go away because implicit in that remembering is a questioning of the powerful, both past and present. Would Robert Fisk prefer the poppy was set aside and the remembering and questioning were forgotten?

Fisk is concerned at the vitriolic anti-European sentiment currently prevalent in Britain, writing, “For the fields of Flanders, the real mud and faeces and blood which those vile poppies are supposed to symbolise, showed just how European the dead generations were.” Nowhere on the Western Front have I ever encountered xenpohobic sentiments, what is more striking are the poppy tributes left in German cemeteries by groups of British visitors.

Speaking of the Poles who fought for Britain in the Second World War, he says, “the poppy wearers want to throw the children of those brave men out of Britain.” The poppy wearers? I am a poppy wearer, I carry a British passport, I recoil at the visceral racism that has arisen in Britain, but to tie it to the wearing of the poppy is absurd.

He insists that the poppy, is “the very last symbol that ‘our’ dead remain more precious than the millions of human beings Britain has killed, in the Middle East for example, for whom we wear no token of remembrance.” Really? Who says so? How does he know what passes through the minds of those standing at remembrance ceremonies?

Robert Fisk’s books are magisterial, his writing incisive and provocative, his knowledge of the history of the Middle East virtually unrivalled. If the poppy and the associated commemorations disappeared, he would undoubtedly still remember the conflicts and the victims, but if the poppy disappeared how many working people would remember the hypocrisy and betrayal of the Great War, and of all wars since? 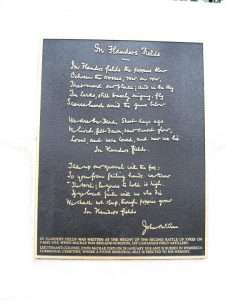