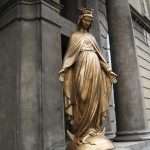 Driving towards the city along the Naas dual carriageway, it felt odd to be Dublin-bound on 8th December. The cause for the journey was the need to attend a meeting that would not be pleasant, but for a moment there was a chance to enjoy the blue sky and the winter sunshine. The car thermometer declared it to be a very unseasonable twelve degrees outside; with the sunshine, it felt warmer.

Lest anyone think that the tradition of going up to Dublin for Christmas shopping has altogether faded, with the growth of provincial towns and the innumerable opportunities provided by online shopping, it was noticeable that a significant amount of traffic left the M50 at the junction for Dundrum and its shopping centre.

Before the afternoon appointment, there was a chance to go out to Enniskerry to sit outside a coffee shop with a friend and spend an hour and a half pondering the world. The aroma of his pipe tobacco brought memories of avuncular clergy of former times, gentle souls for whom the pipe brought a momentary release from the business of the day. The clock ticked around quickly, as it always does in contented moments, and there was a sudden realization that reaching the venue for lunch at 1.30 pm with the meeting starting at 2.00 pm might be a challenge.

Deciding against driving into the city centre proved to be a mistake. The car park at Carrickmines was almost full and a space was found on the second lap, there was a fifteen minute wait for the tram. By the time the room was reached, the meeting was due to start in ten minutes. The contentment of the morning evaporated as the agenda commenced.

Afterwards, the thought returned that this was the 8th December, this was a special day in the life of many of those who had for decades come here to see the Christmas lights, to see the shop windows, to ponder a world far removed from the townlands from which they had come.

Simply drifting among the crowds in Grafton Street, there was time to just feel the mood. Buskers and canvassers and collectors, and people of every sort and condition. Middle aged clerics were obviously not the target of the young woman handing out leaflets for beauty products (even though they might most need them). There was conversation and laughter and a palpable sense of excitement. Were I a child, it would be a good place to be. 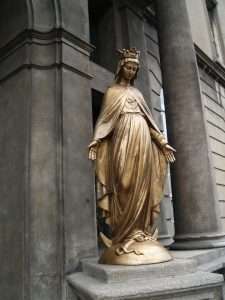