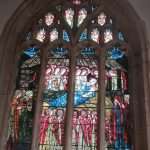 Standing in Huish Episcopi church yesterday morning again brought to mind an old Jewish story used on numerous occasions when preaching. It’s a story about searching for treasure in in order to find contentment of heart.

The story is told of Isaac the son of Jacob, a Jewish rabbi living near the Polish city of Cracow many years ago.

The captain of the guard roared with laughter, “Treasure under the bridge indeed. You silly old man, are you not old enough not to believe in dreams? I myself had a dream last week. I dreamt there was treasure buried in the house of a rabbi called Isaac the son of Jacob. What would you make of that dream, old man?”

Some years ago, there was a moment of feeling what it must have been like to have been Isaac the son of Jacob when visiting an exhibition of the work of Edward Burne-Jones at the art gallery in Birmingham. Notes on Burne-Jones’ canvas of the Epiphany said that Burne-Jones depiction of the Nativity was to be found at Huish Episcopi church in Somerset. This was one of the churches in my home parish, but I had never taken sufficient notice of the church interior to see the treasure it contained.

Standing in front of the window yesterday, I wondered what other treasures I might have casually missed. 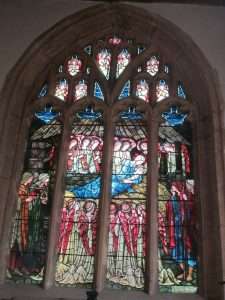